FIVB President Dr Ary S. Graça F° today highlighted the huge growth of volleyball during his 10 years as President and urged National Federations to dream big during the President’s Report at the 38th FIVB World Congress in Arnhem, the Netherlands.

As the global Volleyball Family celebrates Dr Ary S. Graça F°’s 10-year anniversary as FIVB President, his report on the opening day of the World Congress was an opportunity to look back at all that has been achieved in volleyball and beach volleyball in the past decade.

Among these achievements is the FIVB’s landmark partnership with CVC Capital Partners and the creation of Volleyball World, the commercial arm of volleyball. Since its launch in February 2021, Volleyball World has launched a cutting-edge new tour, the Beach Pro Tour, secured partnerships with a catalogue of top brands such as Mizuno and DHL, and signed multi-year broadcast partnerships with the likes of Polsat and ESPN. 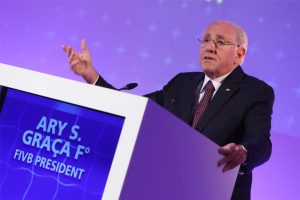 “When I was elected the FIVB President in 2012, I promised to work tirelessly with you to revolutionise our sport, bringing opportunities and innovation. I promised to elevate volleyball to the place it deserves to be: one of the biggest sports in the world. 10 years later, I am delighted to see how far we have come, but to also look at how much more we can do for volleyball and how we can best support you, our National Federations,” said President Dr Ary S. Graça F°.

A key highlight of the report was the FIVB’s commitment to reinvesting the money that comes from the sport back into the sport through revolutionary programmes like Volleyball Empowerment. Under the leadership of President Dr Ary S. Graça F°, development support has increased by 314% with almost 50 million USD invested into National Federations and national teams over the past 10 years. 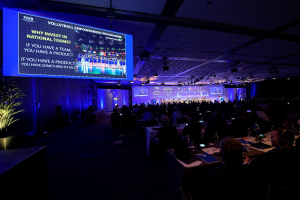 The FIVB President explains the importance of investing in national teams

“Now, as I promised you 10 years ago, I continue to offer you opportunities. I don’t want to simply give you a fish; I want to teach you how to fish. And I will not abandon any of you, like many of you were in the past,” said the FIVB President.

“That’s why we launched the Volleyball Empowerment programme, to reinvest the money from our partnership with CVC directly into our national teams, in both men’s and women’s volleyball, beach volleyball and snow volleyball.”

The FIVB President also pledged that he would further increase the resources available to support all 222 National Federations and continue to grow the sport all over the world.

The notion of building for the future together was echoed throughout the President’s Report. Through Volleyball Empowerment to drive the sport’s development, Volleyball World to maximise the commercial potential of the sport and a commitment to innovation and opportunity, the President promised to lead the sport to even greater success moving forward.

The report closed with an inspirational message of unity from President Dr Ary S. Graça F°:

The Congress is set to continue over the next two days with a number of key topics and reports while the FIVB Volleyball Women’s World Championship, co-hosted by the Netherlands and Poland, also gets underway on Saturday.