Kobe, Japan, October 3, 2019 – FIVB President Dr. Ary S. Graça F° met with ASICS CEO and Chairman Mr. Motoi Oyama, and President and COO Mr. Yasuhito Hirota, at the company’s headquarters in Kobe to discuss the ongoing partnership between the two organisations and opportunities that will arise from the development of the FIVB’s digital ecosystem.

President Ary Graça reaffirmed the FIVB’s commitment to ASICS and revealed his vision for the future of volleyball. The delegation also discussed how the FIVB’s global presence could be an asset to ASICS in achieving its goal of increasing operations in the USA, Europe and China, as well as new ideas for future ASICS products. The parties also talked about the Japanese sportswear and equipment manufacturer’s role in supporting volleyball players and teams.

The FIVB President shared with ASICS the impressive viewing figures from the FIVB Women’s Volleyball World Cup, where the sport received 10-12% of Japan’s total TV audience when the matches were televised.

“Today’s meeting is testament to our well-established partnership with ASICS, who continue to bring innovative ideas to volleyball,” President Ary Graça said. “In this way, the FIVB are able to deliver the ultimate digital experience to its fans all around the world. I very much look forward to continue working together with ASICS for the many more years to come.”

Following the meeting, the FIVB President travelled straight to Fukuoka where he was present for Japan’s opening match of the men’s 2019 FIVB Volleyball World Cup against Italy, which the hosts won 3-0. 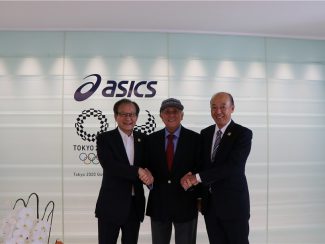