FROM QUALIFIER TO POOL LEADER FOR BRAZILIANS GUTO & SAYMON

Tokyo, Japan, July 25, 2019 – For the second-straight day at the $300,000 Tokyo Open, Saymon Barbosa and Gustavo “Guto” Carvalhaes have won matches with the Brazilians’ effort here Thursday earning the pair the lead in their group at the FIVB Beach Volleyball World Tour event.

Seeded 18th in the Tokyo Open main draw after winning a qualifying match on Wednesday over a team from Thailand, Saymon and Guto posted wins over higher-seeded pairs from the United States and Japan to gain at least tied for the Pool F leadership.

The Brazilians close out group action Friday against 19th-seeded qualifiers Likejiang Ha and Jiaxin Wu of China, who split their matches with Americans and Japanese Thursday.

“We like our position in the pool, but we still have to win our match with the Chinese to avoid the pool tie-breakers,” said Guto.  “We have played well the last two weeks and hope to continue playing at a high-level Friday. This is an important tournament for us as we need to post another good finish on the World Tour.”

After losing country quota matches at the end of May and in mid-June at FIVB World Tour events in the Czech Republic and Poland, Guto and Saymon bounced back with a fifth place two weeks ago in Switzerland and a ninth-place finish last week in Portugal.

“Playing and losing in the country quota rounds is tough,” Guto added.  “Since we missed playing in the World Championships, we had some time off to work on our game. So far, the practice time has helped us. Now, we need to reach the semifinals to help us avoid playing in future country quotas.”

The Tokyo Open continues through Sunday when the gold medal men’s and women’s teams will capture the $20,000 first-place prizes. 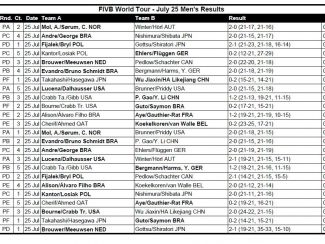 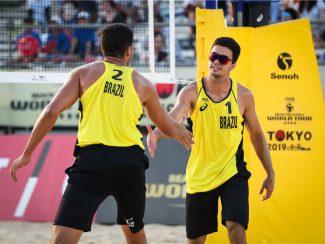