Bangkok, Thailand, February 21, 2021 – The top 8 men’s and women’s teams in New Zealand are doing battle at Cathedral Square in the Christchurch CBD, a site that was heavily damaged in the large earthquakes that struck in 2010 & 2011.

The Christchurch Super Slam is the third of five Tour events, and day 1 saw each team play one match in the double elimination format.

Northland Slam Champion and local player Alice Zeimann has had a disrupted start to this event with partner Shaunna Polley being forced to withdraw due to injury, Zeimann called in NZL indoor representative Stacey Niao and they opened with a 2-0 (21-8, 21-16) victory over Libby Houghton and Katie Sadlier.

On the Men’s side, injuries to Johann Timmer (current tour leader) and Brad Fullerton saw a reshuffle of teams as well, with veteran Mike Watson pairing up for the first time with tour rookie Bae Fountain. The 2020 Cook Islands World Tour 1 Star winner Griffin Muller paired up with Tom Reid and they were the first men’s match up on Centre Court and went down to top seeds Alani Nicklin & Tom Hartles.

The last match of the day saw local team Mana Placid & Jacob Celeen-Thomas from Christchurch take on Watson & Fountain in front of the largest crowd of the day. The Tauranga pair were too strong in the end, winning the match 2-0.

The match ups in the winners bracket for Day 2 will see: 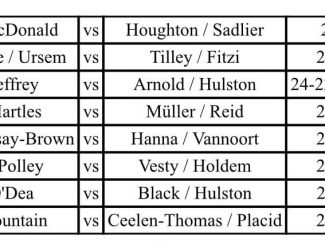 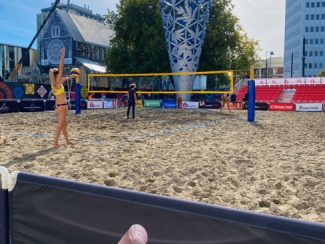