Siem Reap, Cambodia, February 6, 2020 – The American pairs of Kimberly Hildreth/Sarah Schermerhorn and Traci Callahan/Crissy Jones each posted a pair of qualifying wins here Thursday to advance to the main draw of the US$25,000 Anchor Beach Volleyball Carnival.

The two teams from the United States joined a third American pair in gaining a spot in Friday’s pool play rounds along with qualifying tandems from Israel, Japan and the Ukraine at the first women’s event on the 2020 FIVB World Tour calendar.

Seeded 14th in the 15-team qualifier, Callahan and Jones defeated a team from Switzerland in their first match Thursday before upsetting second-seeded and two-time FIVB World Tour winners Satono Ishitsubo/Asami Shiba of Japan 2-0 (21-12, 24-22) in a 40-minute match.

The 15th-seeded Hildreth and Schermerhorn ousted a Japanese pair in their opening contest before advancing to the main draw by defeating third-seeded Chanthira Khanok/Yodsaphat Pakham of Thailand 2-0 (21-12, 21-14) in 34 minutes.

While the first two American qualifying pairs are playing in their first World Tour event together, the third advancing duo from the United States is competing in their second FIVB tournament. Fifth-seeded Aurora Davis and Allie Wheeler scored a 2-1 (21-14, 22-24, 15-10) win in 52 minutes over eighth-seeded Okholm Hansen/Maria Tyndeskov of Denmark. 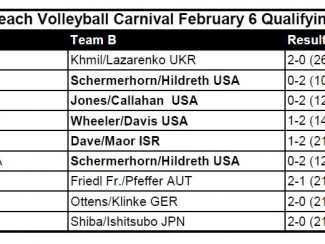 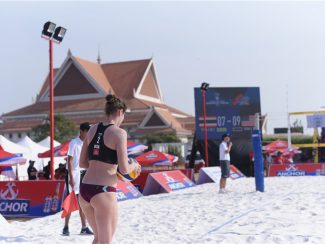