HOME TRIUMPH AT WAGRAIN-KLEINARL – GOLD AND SILVER FOR AUSTRIA

Wagrain-Kleinarl, Austria, March 31, 2019 – The host teams of Austria 1 and Austria 2 won the men’s gold and silver medals at the first ever event on the inaugural FIVB Snow Volleyball World Tour, co-organized with the CEV on the gorgeous Alpine slopes of Wagrain-Kleinarl. Austria 1, or Florian Schnetzer, Alexander Huber, Martin Streitfellner and Christoph Dressler, triumphed with the trophy after a 2-0 (15-11, 15-10) win over their compatriots Felix Friedl, Arwin Kopschar and Maximilian Trummer in the final, as both teams were enthusiastically cheered on by the home crowd throughout the match.

While Schnetzer has multiple snow volleyball medals to his name, for his teammates this was the first podium finish in the new winter discipline. Huber, Streitfellner and Schnetzer have fifth place finishes from the inaugural CEV Snow Volleyball European Championship, held last year in Wagrain-Kleinarl and Flachau, but for all of them this was the first international appearance at a three-a-side snow volleyball tournament. In the Austria 2 squad, only Kopschar had some previous international experience on the snow. A couple of weeks ago Huber and Dressler won the Austrian national championship together with Friedl and Simon Fruehbauer.

The bronze medal went to the team of Russia 1 – Pavel Rakusov, Yury Bogatov, Nikita Kuzmin and Petr Bakhnar. For this team, this is already the fourth international medal this season, as they also won CEV European Tour gold at Bakuriani and bronze at Moscow and Erciyes. In addition, Bogatov and Rakusov have multiple two-a-side European Tour medals from previous seasons to their names.

In both sets of the final, the more experienced Austrian team dominated, but to the delight of the hundreds of spectators the game was still very competitive. A great hammer by Dressler put an end to the first set at 15-11. At match point, Schnetzer gave the opponents’ reception hard time from the serving line and scored an ace to close the second set at 15-10. 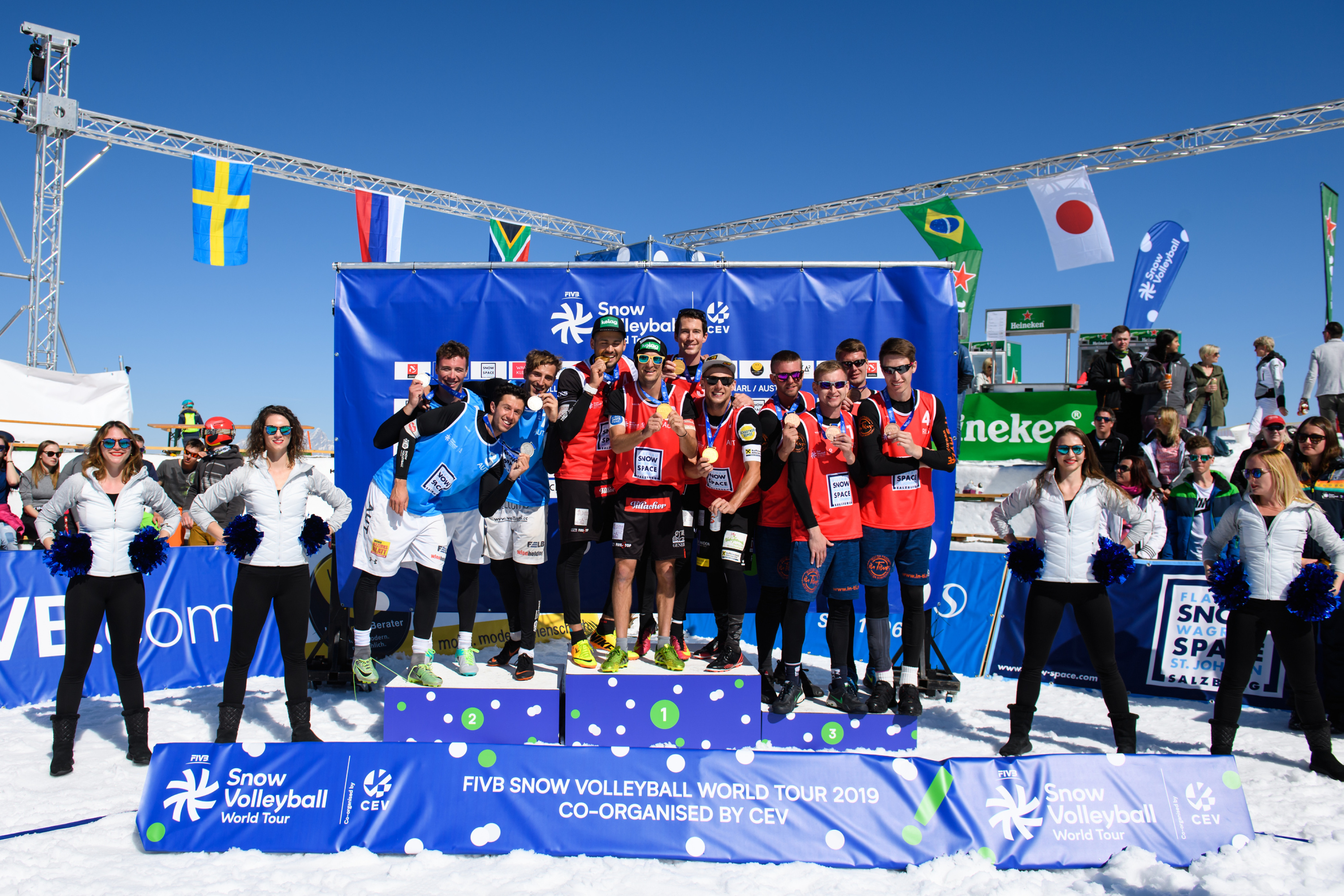 “We are feeling great!” Huber was the first to exclaim after receiving the trophy from the hands of Austrian Volleyball Federation President Gernot Leitner on the court immediately after the last whistle. “We have been on the sand for most of the year and now we switched to the snow for the last couple of weeks. It’s so much fun! The atmosphere is great. We are so proud that this event is in Austria and it feels great that we also won the title.”

“I have played snow volleyball since eight years ago and it’s amazing how it’s been developing. The organizers and the federations do an amazing job. So many nations come to play snow volleyball and I think it will have a great future,” Schnetzer added.