Lebanon and Jordan, which performed impressively to beat them all to top respective Pool A and Pool B, continued their good show in the 10-team inaugural competition, which kicked off between November 15 to 24, 2022.

In their quarterfinal match against Qatar, fourth place in Pool B, Lebanon faced no issues in shutting out the less-rated side in a totally one-sided battle 25-6, 25-11, 25-14 to secure their berth in the Tuesday’s semifinals, where they are due to challenge the United Arab Emirates. Iraq, second place in Pool A, struggled to beat spirited Kuwait in hard-fought four-setter 25-22, 22-25, 25-22, 30-28 in their action-packed quarterfinal encounter to next go up against hosts and Pool B winners Jordan.

The host side still lived up to all expectations on Monday to demolish Saudi Arabia in straight sets.  Their win in the first two sets ended on positive note as Jordan comfortably cruised to 25-12, 25-14 triumph. However, although the visitors mounted a strong challenge in the third set, the host team held on to win the closely-contested set 25-23, match and a semifinal berth. 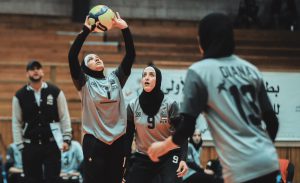 Earlier, the 9th-10 playoff clash between two winless teams, Oman and Palestine, saw the former fare better to rout the latter 25-17, 25-17, 25-20. Oman finished 9th in this championship, with Palestine on the bottom of the 10-team standing.

In the Tuesday’s semifinal encounters, Jordan take on Iraq and the UAE challenge Lebanon. Contesting the classification round  for the 5th-8th rankings, Saudi Arabia play Kuwait and Syria meet Qatar.