Manila, Philippines, December 6, 2019 – Defending champions Thailand and Indonesia respectively powered past Myanmar and Philippines to top their pools, but the quartet advanced to the semi-finals of the 30th Southeast Asian Games men’s volleyball competition at the refurbished PhilSports Arena in Pasig City.

Thailand, eight-time SEA Games winners including four consecutive times from 2011 to 2017, and Myanmar have already made the cut for the final four following their win against Singapore in the three-team Pool A, while Indonesia and Philippines have also been assured of securing semi-final berths after two wins against Vietnam and Cambodia in the four-team Pool B.

The Friday’s clashes – Thailand against Myanmar and Indonesia against hosts Philippines, were to decide the winners in Pool A and Pool B. 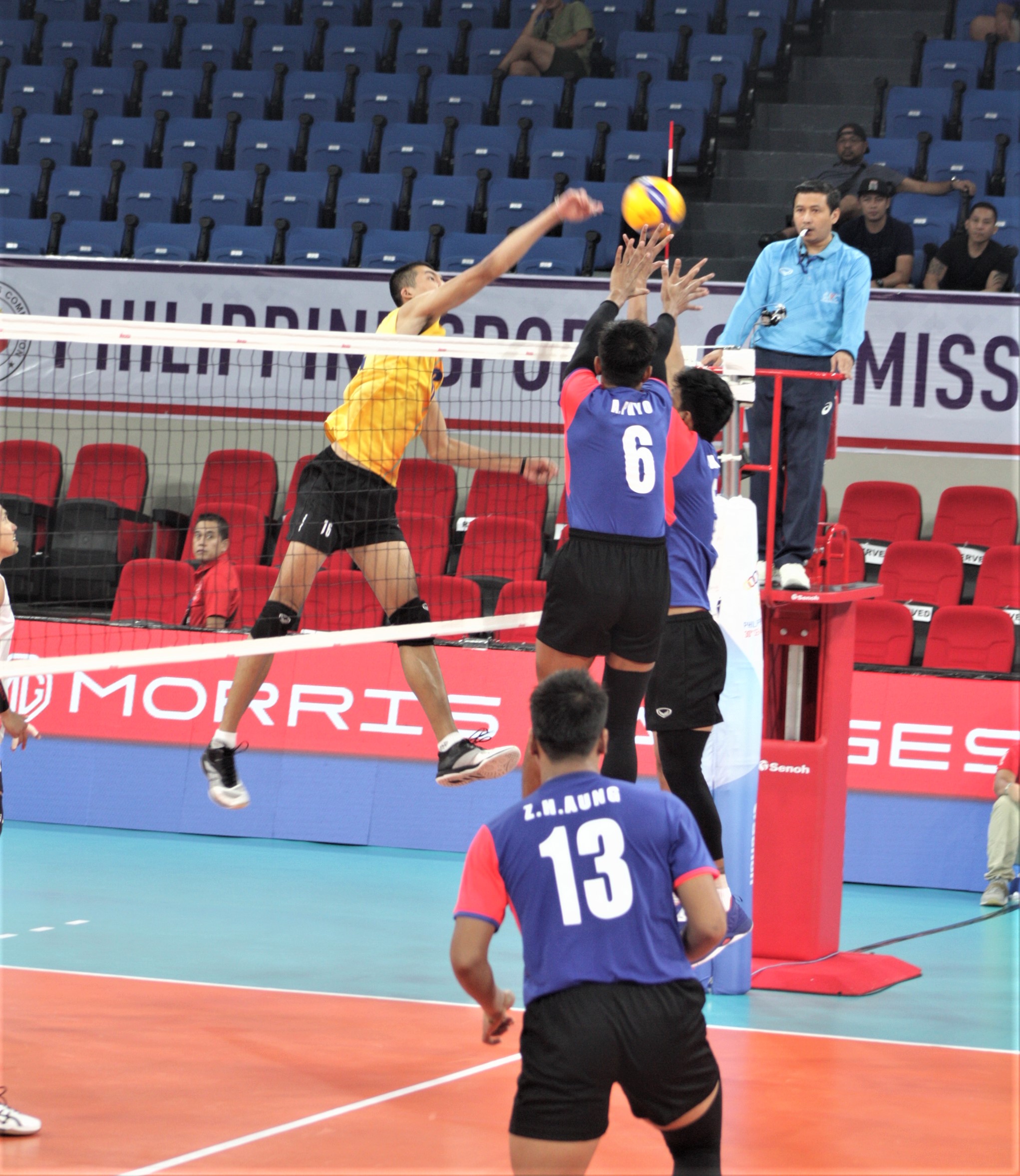 Against Myanmar, playing without their regular captain, ace spiker Aung Thu, Thailand relied on the collective rather than any individual but they had a sea of attacking riches at their disposal. 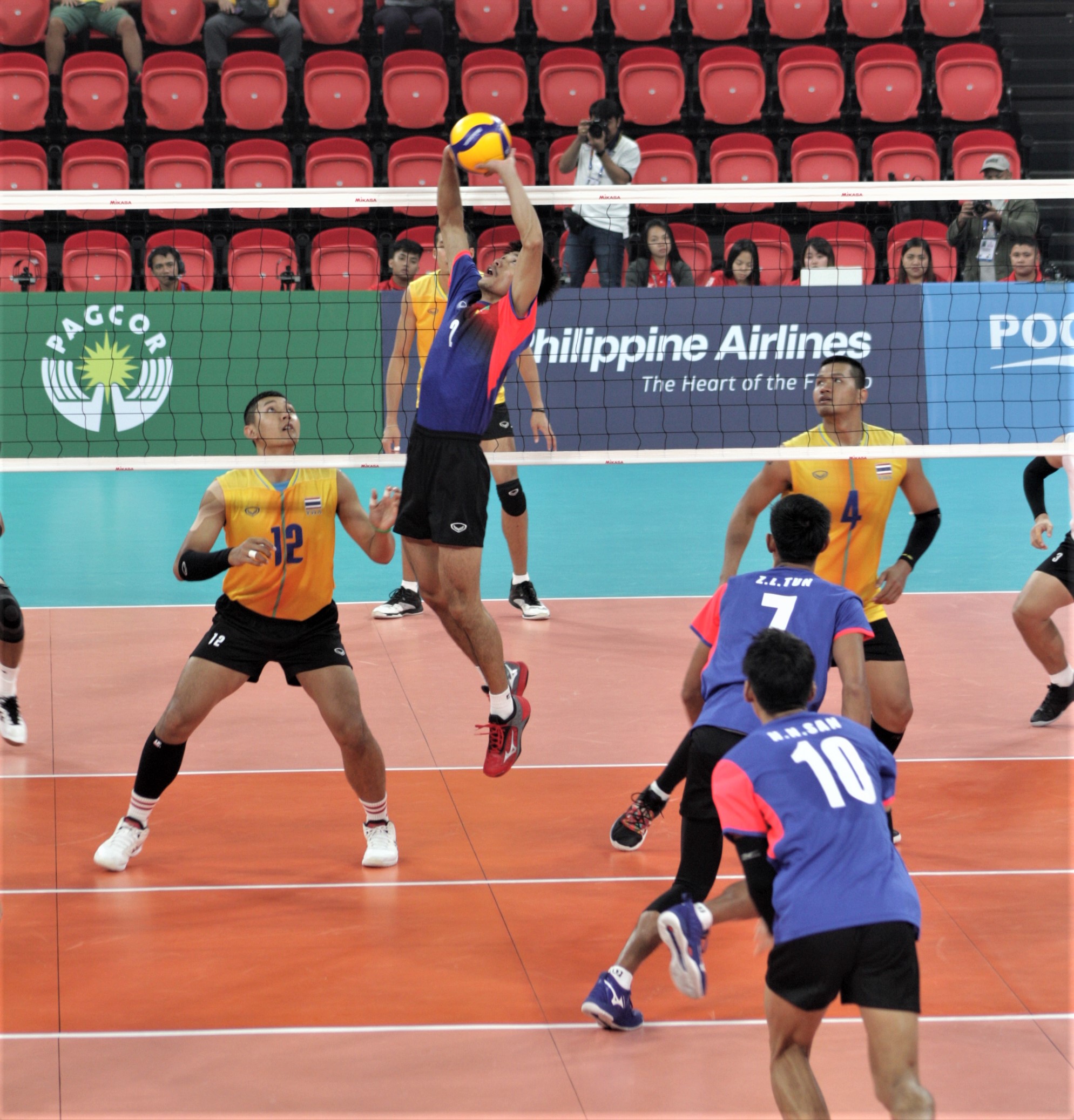 Fresh from a brilliant comeback 3-1 win over Singapore in their opening Pool A match in the SEA Games, the Thai squad came into the Friday’s match full of confidence and they got the job well done effortlessly while showing flashes of the brilliances that took them past the rivals in comfortable straight sets 25-14 25-20 25-14 in 63 minutes. Veterans Kissada Nilsawai chipped in with 14 points from 10 attacks and 4 solid blocks for Thailand, while Jakkraphop Saengsee contributed 10 points including 9 points from 16 attempts. Ya Htike Wai was the lone player in the Myanmar side who scored in double figures as he topped scored with 12 points for the team. Meanwhile, hosts Philippines gave Indonesia a sturdy challenge in Pool B. Indonesia, former nine-time SEA Games champions, came back much stronger in this year’s SEA Games in an effort of ending their 10-year gold-medal drought as they captured the Games title for the last time in 2009 in Laos. Led by powerful attacker Bryan Bagunas, Philippines, chasing dreams of winning their first-ever SEA Games gold medal, made a storming start as they fought the strong visitors neck and neck in the first two sets. However, thanks to excellent offensive combinations of Rivan Nurmulki’s spectacular attacks and the team’s solid defence, the more experienced Indonesians played consistently to clinch both closely-contested sets 25-23 32-30.

In the third set, Bagunas was immense for Philippines at the net, repelling wave after wave of the team’s attacks, but Rivan and Randu Wahyu Pradana were defending brilliantly, blocking almost everything the rivals could throw at them. Indonesia sealed the set 25-20 and match. Rivan Nurmulki scored a match-high 24 points from19 attacks and a team-leading 5 blocks, while team-mate Doni Haryono added 18 points including 16 attacks from 25 attempts. Bryan Bagunas led the host side with 24 points, all from his attacking ability.

The other Pool B clash saw Cambodia hog the limelight as the fast-improving side came from behind to beat Vietnam, bronze medallists at the previous Games two years ago in Kuala Lumpur, Malaysia, in a hard-fought five-set thriller 20-25 26-24 21-25 27-25 15-11 in gruelling 131 minutes. At the end of the pool plays on Friday, Thailand captured the top spot in Pool A with 6 points from two straight wins, followed by Myanmar with 3 points from one win against one loss. Winless Singapore came in third place with no point.

Indonesia topped Pool B with 9 points from three wins in a row, while hosts Philippines finished second with 6 points from two wins against one loss. Cambodia and Vietnam came in third and fourth places with 2 an 1 point respectively.

On Saturday, Thailand are due to take on Vietnam in the women’s round-robin competition, with Indonesia going up against hosts Philippines.

The men’s competition will resume on Sunday. Singapore will meet Vietnam in the 5th-7th playoff match, with Indonesia pitted against Myanmar and Thailand looking to build on their positive results as they will next face hosts Philippines in the do-or-die semi-finals. 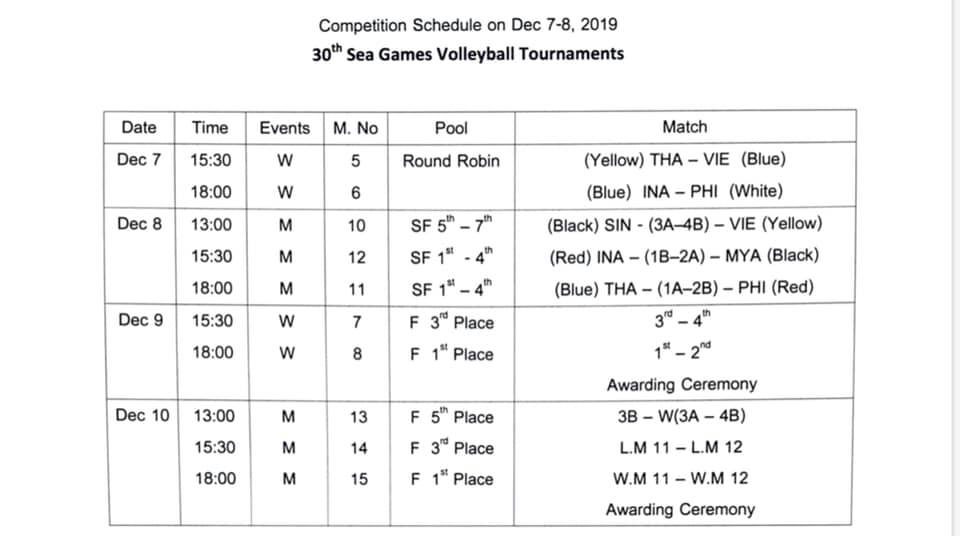 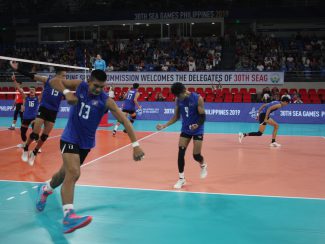 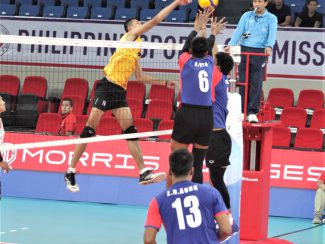 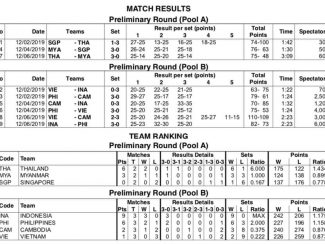