Opposite Saber Kazemi led all scorers with 16 points, coming from 9 attacks and 7 service aces.

Iran served fast and hard to start the match at the Chiba Port Arena with a 5-0 run.

Thailand tried to put pressure on serve but suffered from errors instead. And while they were working hard to improve their serve-receive, their attacks had to face Iran’s imposing presence at the net. The Thai side tried to find a solution to the challenge of their opponents, and the first order for them was to keep their floor defense solid. They were able to play along rallies, and even won several points after.

Iran activated their wing attack, with Milad Ebadipour mounting good momentum from the left flank, to close out the first set at 25-17. Kazemi launched back-to-back aces to set the tone for the second set. Iran went on to explode with Meisam Salehi’s wing attack.

Thailand tried to work the ball around with Anut Promchan trying the pipe, while Chaipipat Buaket operated from the right side. However, Iran played in system and kept their errors to a minimum to seize the second set, 25-12.

In the third set, the Thais tried to amend their quality and posted pretty impressive counter-attacks. Kittithad Nuwaddee and Assanaphan Chantajorn scored with bold moves from the wing. 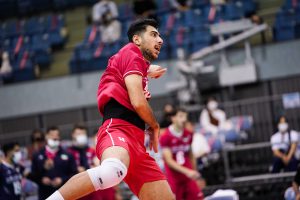 Iran stood their ground as setter Javad Karimi ran the offense with much skill and mastery, which brought the three-time titleholders to 25-18 in the final set.

Pool B in the Preliminary Round will conclude on Tuesday, with Iran playing Pakistan at 12:00 local, while Thailand will face Hong Kong at 15:00 local in Chiba Port Arena.

Iran will look to defend their title as the reigning champions from the 2019 edition, apart from booking an outright berth in the 2022 FIVB Volleyball Men’s World Championship in Russia.