Riffa, Bahrain, August 26, 2022 – Reigning and six-time champions Iran and India became the first two teams to storm their ways into the much-anticipated semifinals of the 21st Asian Men’s U20 Volleyball Championship at Isa Sports City Hall on Friday. 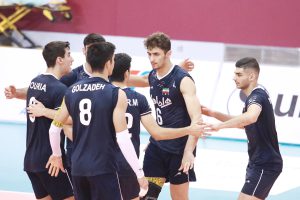 Contesting their classification round for 1st-12th places, Pool A winners and hosts Bahrain lost the first two sets 22-25, 19-25 to India and battled hard to get back on track, but found the Indians a tough nut to crack to go down in hotly-contested four-set affair 22-25, 19-25, 28-26, 24-26. Ali Sayed Hashem scored a match-high 20 points on the hosts’ losing efforts. Tanish Chaudhary and Harshir Giri scored 14 points apiece to steer India to this crucial victory. Pool B winners and title-holders Iran, in their usual style, didn’t play with much fanfare but coach Gholamreza Momeni Moghadam’s men proved once again a well-oiled machine as  Amir Mohammad Golzadeh yielded 17 points including 3 blocks and 2 aces to help Iran brush off Saudi Arabia in straight sets 25-20, 25-15, 25-21. 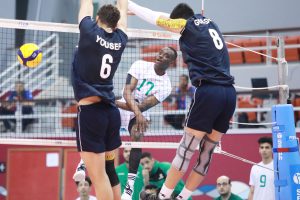 As India and Iran secured their semi-final berths in the topflight championship, the other teams, also contesting the classification round for 1st-12th places on Friday, fought it all out to make it to the next round for spots in top six.

However, only the stronger teams were on target, troubling their lower-ranked opponents with aggressive attacks, consistent play and impeccable defence and making them picked apart by the high-flying hitters to eventually surrender in the electrifying encounters. 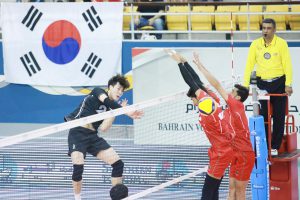 Former six-time champions Korea, which picked up silver medal in the previous edition also held here four years ago, recovered from the first-set loss 23-25 to Pakistan and fought back mightily to take the remaining three sets 25-21, 25-23, 25-20 for a place in the next round of the top six teams.

Lee Yunsoo weighed in with a huge 24 points for Korea, while Muhammad Saqlain led Pakistan with 17 points. 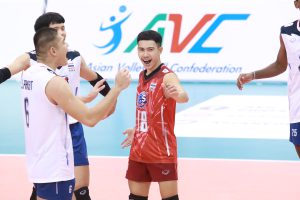 The clash between Thailand and Iraq turned out to be a 2018 bronze-medal rematch which saw the former, bronze medallists at the previous episode, come up with superb form to seal the first two sets 25-21, 25-17. However, the Iraqis were never-say-die as they bounced back effectively to take the next two sets 25-23, 25-19, forcing the Thais to work overtime. Both teams fought tooth and nail to win the fifth set, but Thailand fared better at home stretch to capture the thrilling decider 15-12. 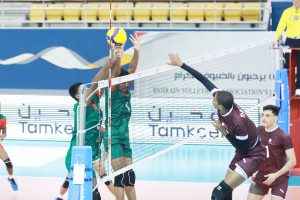 Bangladesh block a spiker from Qatar

Another tough match between Bangladesh and Qatar also became a see-saw battle. Qatar started solidly to win the first set 25-20, but Bangladesh hit back to take the second set 25-19 and surged into a 2-1 lead following their 25-18 win in the third set. 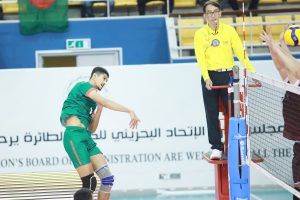 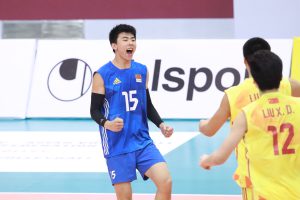 The encounter between former four-time champions China and the United Arab Emirates turned out to be a one-way traffic as the mighty Chinese comfortably advanced to the next round after 3-0 (25-20, 25-14, 25-7) demolition of the UAE. 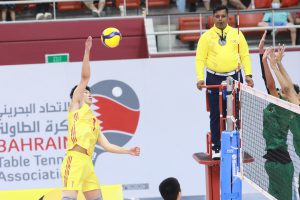 Zhou Xin chipped in with 15 points including 11 attacks for China, while no one scored double-digits for the UAE, with Masood Darwish Mazar delivering 8 points for the losing team. On Saturday, at Court 1, Thailand will challenge China and Korea take on Bangladesh in the classification round for 1st-6th places. The two winning teams will make it to the Sunday’s semifinals, with the winners in the Thailand-China clash taking on India and the Korea-Bangladesh winners going up against Iran.

Also competing at Court 1 on Saturday, Iraq play the UAE and Pakistan meet Qatar in classification round for 7th-12 places.

At Court 2, Chinese Taipei will play Hong Kong, China in classification round for 13th-16th places, with Japan taking on Australia.

Kuwait received a bye on Saturday and as a result, they are sure of finishing on the bottom 17th position in this top-tier tournament. 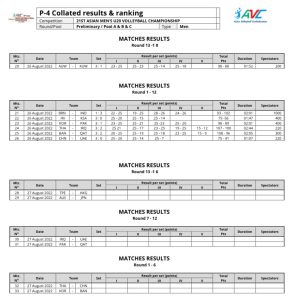 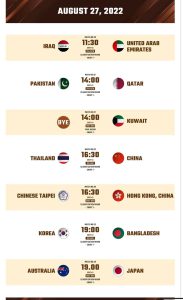