Jiangmen, China, January 6, 2019 – The 8,500-seater Jiangmen Sports Centre Gymnasium is all set for the AVC Men’s Tokyo Qualification 2020 between January 7 and 12, with Asian winners Iran, hosts China and formidable Korea being strong contenders for the lone ticket up for grabs for the Tokyo 2020.

Iran, Chinese Taipei, China and Kazakhstan are in Pool A, while Pool B features Qatar, India, Australia and Korea. All teams will play the pool round-robin preliminaries and only top two teams from each pool will advance to the crosswise semi-finals.

The pool plays kick off on Tuesday, with Qatar and India setting up the curtain-raisers at 10am local time. The second match turns out to be a highly-anticipated clash between Korea and Australia, while the third encounter sees Chinese Taipei challenge Iran in their first match on Tuesday. Hosts China will open their campaign against Kazakhstan at 8pm local time.

Iran are ready to flex their muscles following their success at the 2019 Asian Senior Men’s Championship on home soil aside from their 8th place finish at the FIVB World Cup in Japan in October.

Iran will play in Jiangmen without their two key players Amir Ghafour and Farhad Ghaemi, both of them sustained injury and could not join the team for this top-flight competition. However, five strong players had been called to strengthen the team comprising Shahram Mahmoudi, Reza Abedini, Seyed Mohammad Mousavi Eraghi, Majtaba Mirzajanpour M and Morteza Sharifi.

A side packed with talents, Iran arrived in Jiangmen with their heads high as the current Asian champions, world No.8 and the only Asian team which competed at the 2016 Olympic Games in Rio de Janeiro, Brazil. They also hope high to repeat the similar feat this time.

World No.20 and hosts China have their sights firmly set on a strong comeback after a disappointing six-place finish at the last year’s Asian Senior Men’s Championship in Tehran, Iran. Strong players such as Dai Qingyao, Geng Xin, Zhang Zhejia, Miao Ruantong and Zhan Guojun had been called to join the team this time, while head coach Raul Lozano from Argentina has been replaced by Chinese Shen Fulin. China are also expected to take the home crowd advantage in their endeavour of winning laurels.

Meanwhile, Choi Min-Ho, Han Sun-Soo and Kwak Seung-Suk, who were instrumental in helping Korea pick up silver medal at the 2018 Asian Games in Indonesia, remain the key weapons of the Korean side in their quest for the Tokyo 2020 ticket.

However, Australia, which claimed silver at the last year’s Asian Senior Men’s Championship in Iran, fast-improving Chinese Taipei, Qatar, India and Kazakhstan are also expected to mount a strong challenge against one another in the competitive competition. 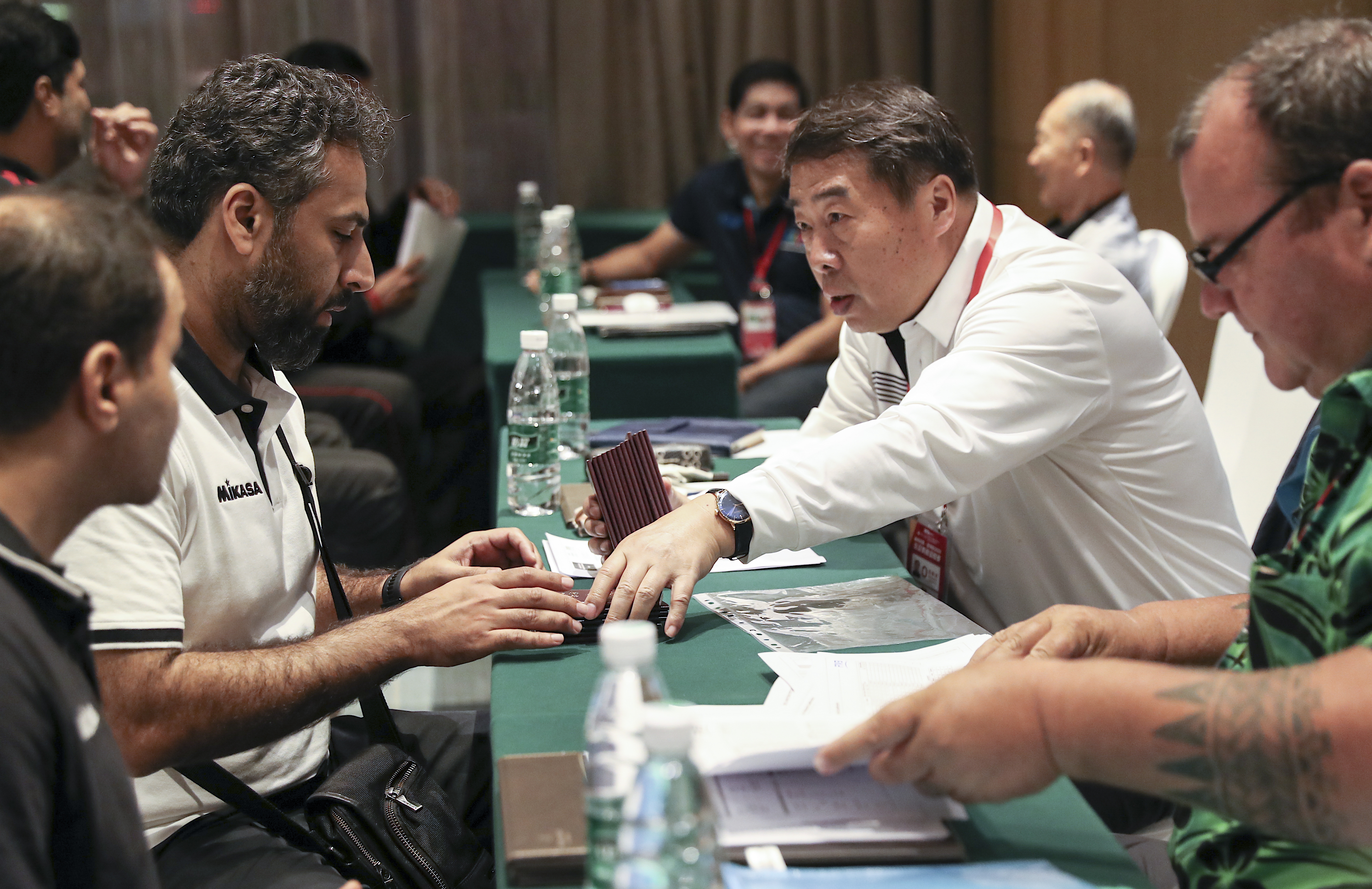 Regarding the organisers’ final preparation for the tournament, the preliminary inquiry of the AVC Men’s Tokyo Qualification 2020 started at the meeting room inside Wanda Realm Jiangmen Hotel on Sunday night. Team officials from Australia, Korea, China, Iran, Chinese Taipei, Qatar and India respectively attended the procedure, setting down all relevant matters for trial ahead of the competition. Kazakhstan arrived in the host city late on Monday afternoon and were due to attend the procedure later. Earlier, the first joint meeting between the local organizers and the Control Committee members took place on Monday morning at the meeting room inside Wanda Realm Jiangmen Hotel. Technical Delegate Mr Hugh Graham and Mr Cai Yi, Director of Competition Department of China Volleyball Association, jointly presided over the meeting. Also in attendance were AVC Coordinator Dr Eom Han-Joo, Tang Huihong, Secretary-General of local organizers, and those in charge of organizing and controlling the top-flight competition. 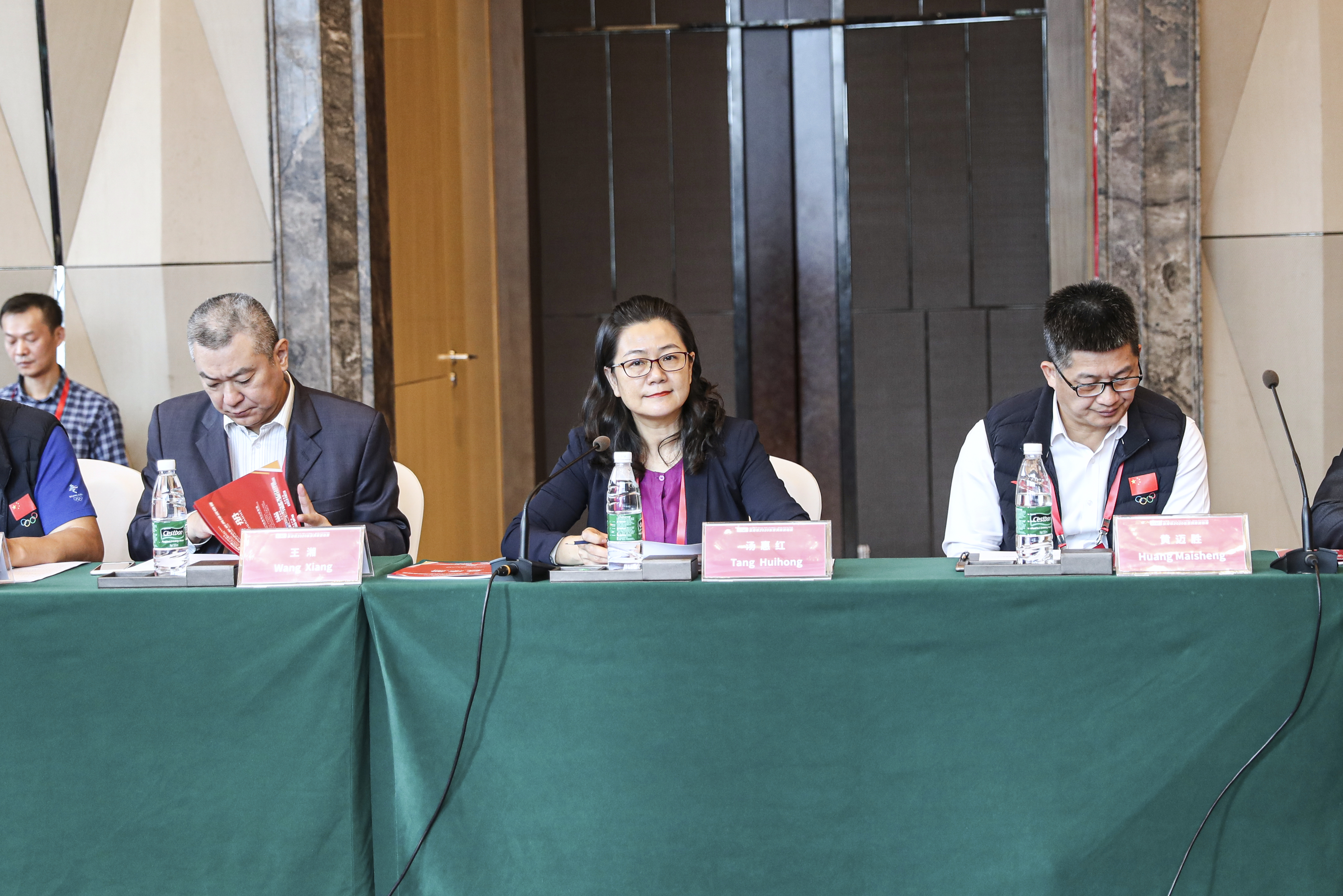 Shortly after the meeting, the organisers and the Control Committee members made a venue inspection at the Jiangmen Sports Centre Gymnasium and found that the state-of-the-art competition venue is 100% ready for the six-day tournament. 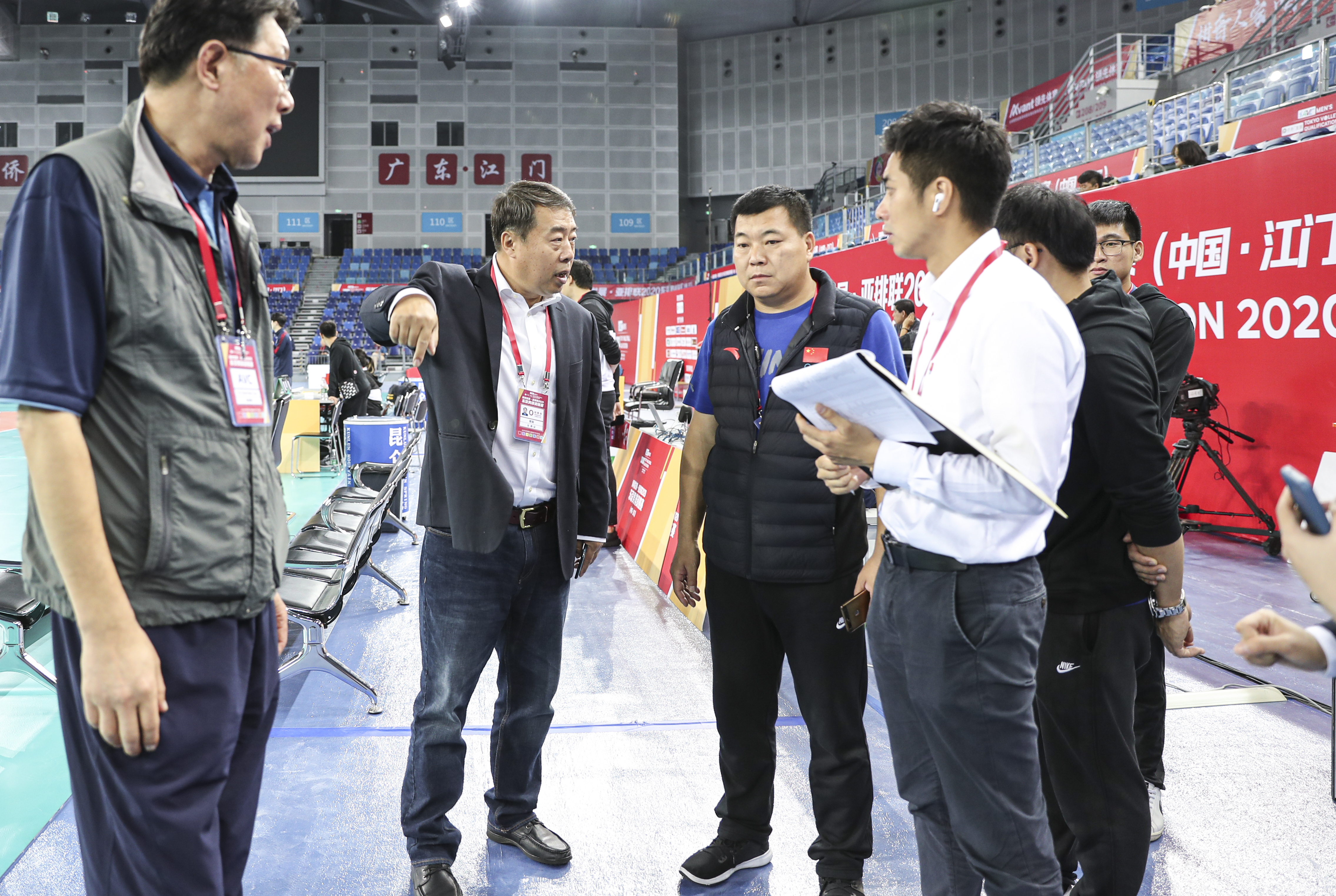 The Referee Clinic was also held on the same day to ensure a smooth run of the tournament and a successful task of all the nominated referees officiating at the competition ahead of the matchdays from January 7 to 12. According to Mr Songsak Chareonpong, Chairman of the AVC Referees Committee and Referee Delegate of the AVC Men’s Tokyo Qualification 2020, all federations/associations sending their teams to participate in all Asian Volleyball Championships must nominate three international referees and send their name list to AVC in order that the AVC RC can select one referee to be the team’s accompanying referee. 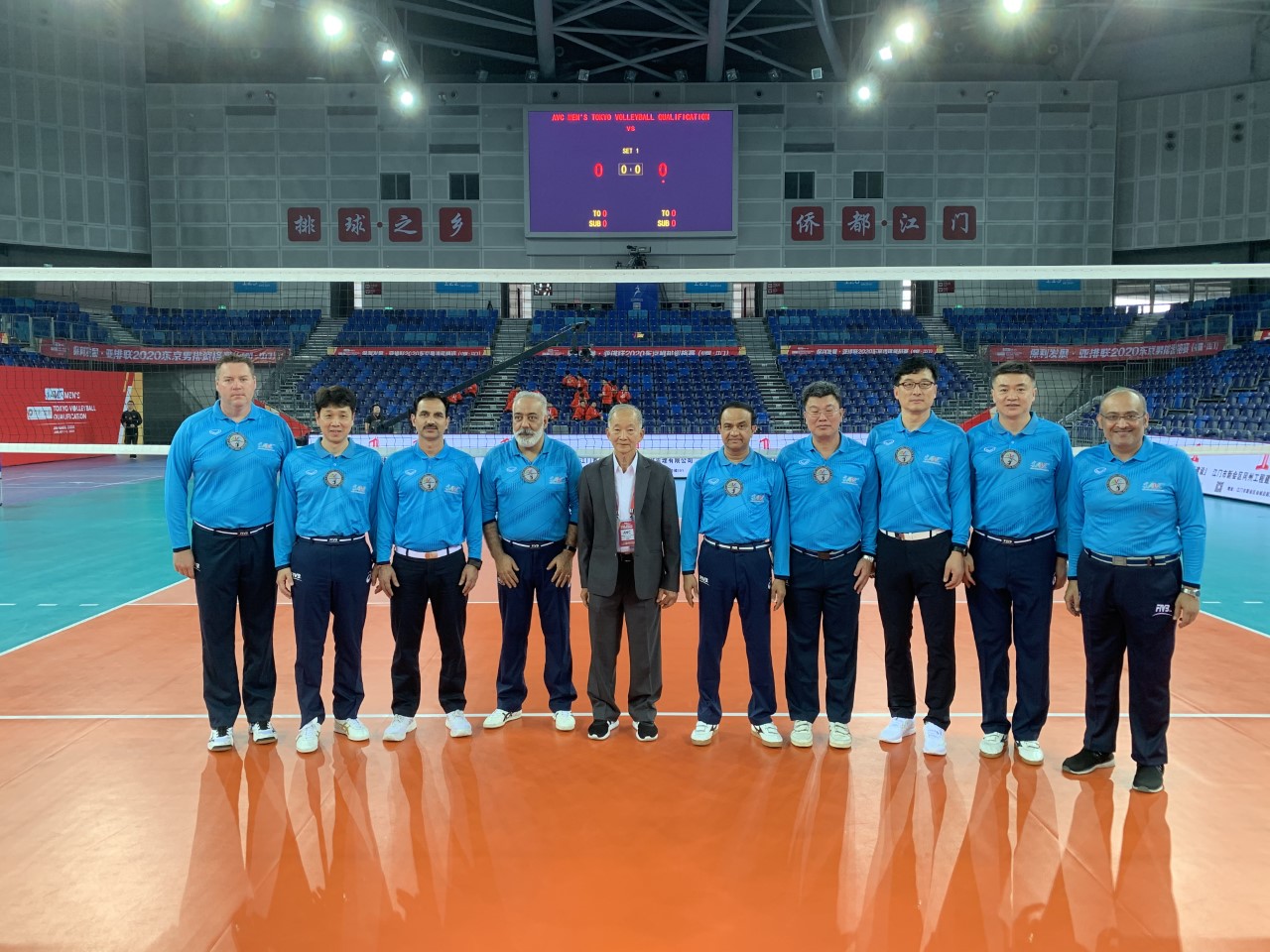 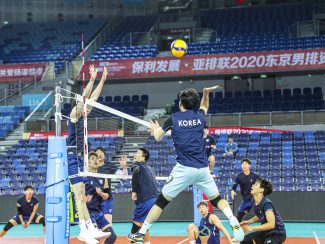 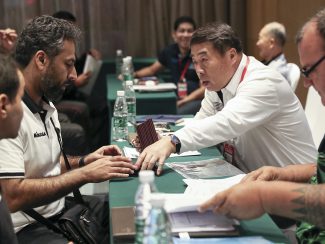 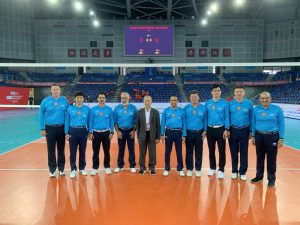 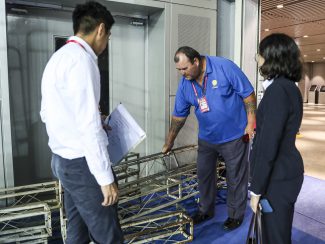 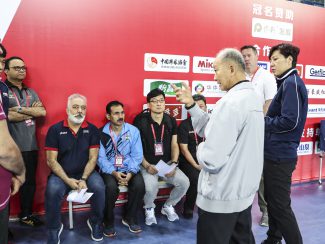 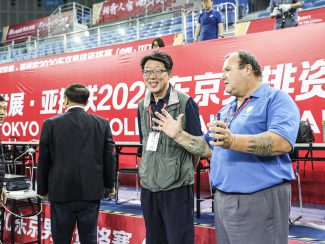 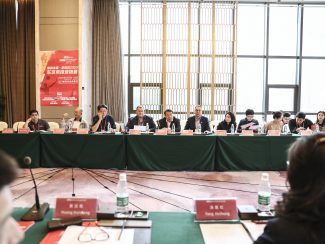 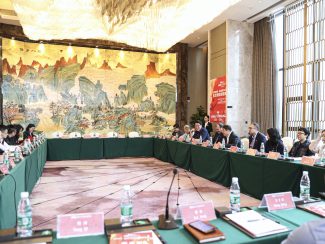 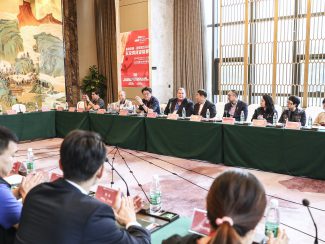 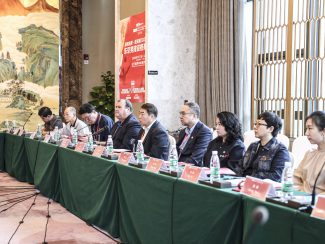 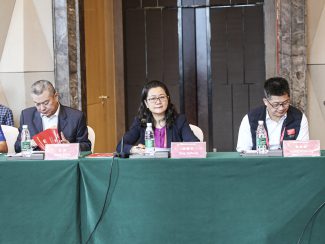 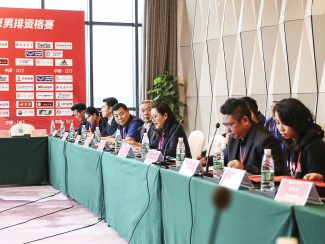 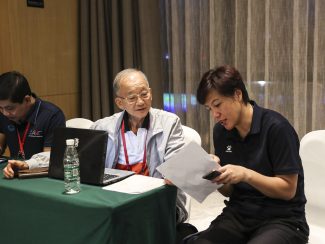