Phnom Penh, Cambodia, February 22, 2020 – Top-seeded Christopher McHugh and Damien Schumann scored a pair of elimination wins here Saturday in the Cambodia capital at the Anchor Beach Volleyball Carnival highlighted by a victory over a Danish pair that had defeated the Australians the previous day.

Entering the FIVB event after winning the Asian Championships in Thailand last week, McHugh and Schumann advanced to their fourth World Tour semifinal by posting a 2-1 (20-22, 21-19, 20-18) quarterfinal triumph in 59 minutes over 13th-seeded Mads Rosager and Martin Trans Hansen of Denmark.

With their two wins Saturday, McHugh and Schumann will be competing in the eighth semifinal on the 2019-2020 FIVB World Tour schedule along with third-seeded Christoph Dressler/Alexander Huber of Austria, 17th-seeded qualifiers Lukas Pfretzschner/Robin Sowa of Germany and 19th-seeded Laurenz Leitner/Florian Schnetzer of Austria.

Dressler and Huber, who are seeking their third FIVB World Tour gold medal and second in Cambodia after winning last March in Siem Reap, will meet compatriots Leitner and Schnetzer in the second of two semifinals Sunday while McHugh and Schumann face off against Pfretzschner and Sowa in the day’s first match.

The winning team in the second of two FIVB World Tour events in Cambodia this month will share the $4,000 first-place prize. Thirteen (13) days ago in Siem Reap, the American team of Lauren Fendrick and Sara Hughes topped the podium in the fourth women’s event on the international beach volleyball calendar.

Following Sunday’s play, the FIVB World Tour takes a break for a week before resuming men’s competition with back-to-back tournaments in Iran (March 3-7 at Bandar Abbas) and Qatar (March 12-15 at Doha). The next women’s event is set for March 5-8 in Guam. 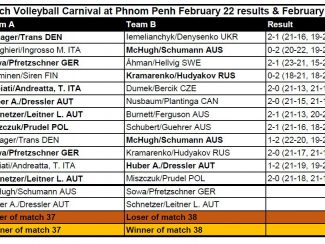 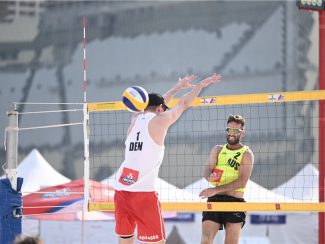