Lausanne, Switzerland, July 1, 2019 – Brazil, Iran, Russia, France and Poland all qualified to join hosts USA in the Final Six of the 2019 FIVB Volleyball Nations League, 10-14 July in Chicago, during the last weekend of the Preliminary Round. This is how it all played out:

Saturday dawned, first in Brisbane, with just three tickets unclaimed. And defending champions Russia were quick to grab one of those – though it took them well over two hours to get the job done, Argentina taking them all the way, before eventually bringing it all home with a 3-2 (25-19, 22-25, 25-18, 21-25, 15-11) win. Russia were now safely out of reach of Italy.

Three down, two to go, before the sun rose in the rest of world, Saturday.

France (at 9-4), Poland (9-4), Italy (8-5) and Canada (8-5) were all in contention for these last two remaining berths – Argentina having now dropped at 7-7 after their loss to Russia and unable any more to overtake the others. In addition, France and Italy were about to go head-to-head later on Saturday in Brasilia.

It was then all down to Canada, racing to catch up with Poland. They needed nothing short of two wins (while hoping Poland would stumble over Portugal in their last match). But the North Americans were up against reigning Olympic champions Brazil – and before a partisan crowd in Brasilia, at that.

It was never meant to be for Canada. Brazil were already qualified and didn’t actually need the win, but they were playing in front of their own fans and obviously needed to impress them. So, despite the South Americans not fielding all their top guns, it was a quick and easy 3-0 (25-20, 25-19, 25-19) for the South Americans.

Canada were out, Poland were in. Six finalists for the 2019 VNL all signed and sealed Saturday night, with one full day of pool play to spare.

Down at the bottom of the table, meanwhile, Australia and Portugal were in a race of their own, trying to avoid relegation. They were two of the four Challenger Teams this year, alongside Canada and Bulgaria, but by the start of Weekend 5 it was down to the two of them – each having scored just two wins.

China were doomed to finish last, but as a Core team were immune to relegation and assured of a spot in the 2020 VNL.

Portugal will be replaced for the 2020 VNL with the winner of the FIVB Volleyball Challenger Cup this week in Ljubljana, featuring Belarus, Chile, Cuba, Egypt, Turkey and hosts Slovenia. 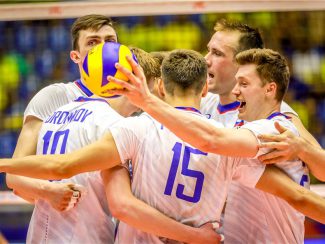