Qatar’s Cherif Younousse and Ahmed Tijan progressed to their fourth consecutive Final Four on the FIVB Beach Volleyball World Tour. They made their way to the semifinals of the Sochi 4-star on Saturday and will play against Christiaan Varenhorst and Steven van de Velde of the Netherlands in one of the duels for the spots in the gold medal match on Sunday. The other semifinal will feature Piotr Kantor and Bartosz Losiak against Adrian Carambula and Enrico Rossi. 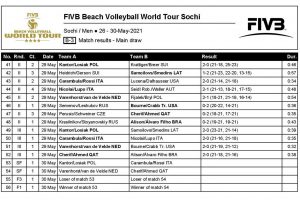 In their eighthfinal match in the morning, Cherif and Ahmed managed to get back at Czechia’s Ondrej Perusic and David Schweiner for losing to them at home at the Doha 4-star eighthfinals in March. The fourth-seeded Qatari pair produced a 2-0 (21-18, 21-17) shutout of the Czechs to make it to the quarters, where they capitalised on the momentum to deliver another clean slate, 2-0 (21-18, 21-16) against Brazil’s Alison Cerutti and Alvaro Filho.

“It’s been a very good performance so far and we are happy about it. But the marathon continues. Each game is a new game. We lost in pool play, but we just keep going and trying to improve game by game,” Cherif told Volleyball World. “So we are happy to be back in the semifinals, but we don’t think of it as a semifinal. It’s just another opportunity to play better than today.”

“The reason for our success at the three Cancun events and here is that we always go for more. Every game is an opportunity for us and we try to capitalise on it. We are grateful to be in the semifinals again after three events on the podium,” added Ahmed. 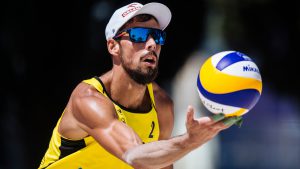 Varenhorst and Van de Velde had a much bumpier road on the last stretch before the quarterfinals. The 14th-seeded Dutch duo had to come back from a set down and persevere through an extended tie-breaker to outplay Poland’s Grzegorz Fijalek and Michal Bryl for a 2-1 (18-21, 21-19, 16-14) eighthfinal victory. It seemed much more straightforward for them in the afternoon quarterfinal, especially in the second set, against USA’s Tri Bourne and Trevor Crabb, as they claimed a 2-0 (21-19, 21-12) win.

Of course, the quarterfinal that attracted the most attention on Saturday afternoon was the battle between the two teams just above and below the red line in the current provisional Olympic ranking. The team below, Kantor and Losiak, made sure the qualification race will get even more interesting in its conclusion with a 2-0 (23-21, 21-14) victory over Latvia’s Aleksandrs Samoilovs and Janis Smedins.

In the eighthfinals, the Polish pair achieved another straight-set win, a 2-0 (21-18, 25-23) over Switzerland’s Marco Krattiger and Florian Breer.

“It’s great for us, especially because the last time we played semifinals was maybe two years ago. We had some injuries, other problems, so it’s good that we are back, we are still fighting for Olympic qualification and this is the most important thing right now, for sure. But we don’t want to think about it. We just want to play our best beach volleyball.

So far we did and I hope we will continue tomorrow. Last time we played against Carambula and Rossi was in a Cancun quarterfinal and we lost 2-1. We have it on video to study and I hope we can be calmer, play much better and finish with a victory. This is our goal and we’ll go for it,” Bartosz Losiak said after the quarterfinal win.

“Every match is the same. Maybe this one was important because we are so close in the Olympic ranking, but for us it does not matter so much. It’s a match. We must win, regardless of who we play against,” Piotr Kantor added.

In an all-Italian quarterfinal clash, 11th-seeded Carambula and Rossi dominated over 13th-seeded Paolo Nicolai and Daniele Lupo to take a 2-0 (21-16, 21-18) victory. Earlier, they knocked another big team out of the way in straight sets, 2-0 (21-14, 21-18) against USA’s Nick Lucena and Phil Dalhausser. It will be the third consecutive Final Four for Carambula and Rossi, after they reached the same stage of the Cancun 2 and Cancun 3 tournaments. 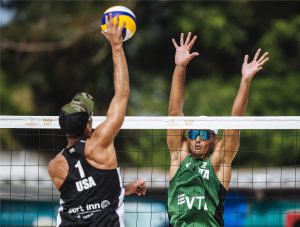