Kantor & Losiak back on top after three years

Eighteenth-seeded Piotr Kantor and Bartosz Losiak claimed the trophy at the Sochi 4-star stop on the 2021 FIVB Beach Volleyball World Tour on Sunday. The Polish tandem has now collected a total of three gold, six silver and five bronze medals on the Tour, but the last time they were on top of the podium was almost three years ago, at home in Warsaw. 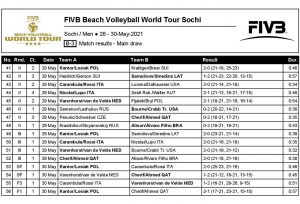 The bronze went 14th-seeded Christiaan Varenhorst and Steven van de Velde of the Netherlands. It was the second World Tour podium for the Dutch pair, after another bronze they won back in May 2019 at the Itapema 4-star.

Ahmed shrugged off some kind of an injury he sustained upon a dive early into the gold medal match. Initially, Kantor and Losiak opened a lead, but failed to hold on to the three-point advantage they had at 13-10. Cherif and Ahmed took control through the rest of the set and won it by a comfortable 21-17. It was time for the Poles to fight back from a solid deficit in set two. They kept their cool in the money time and with a couple of aces along the way wiped out an 18-14 Qatari lead and denied two Qatari match points before leveling the match after Losiak’s 23-21 winner.

The high stakes of the tie-breaker took their toll in terms of way too many unforced errors on both sides, but the suspense was there through most of the set. When it counted the most, Kantor practically owned the net and with a couple of monster blocks handed his team the victory at 15-10. 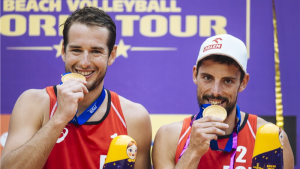 “I have no words to say something more than that I am proud of our team and my partner. That’s all,” Bartosz Losiak told Volleyball World right after receiving the trophy. “Of course, it’s too early to say if we made it to the Olympics, but we made big steps and I hope we continue. We thank the Sochi spectators for the support and for the cheering. It was nice to be back and play in front of them.”

Varenhorst and Van de Velde won the first four rallies of the bronze medal match against Italy’s Adrian Carambula and Enrico Rossi to achieve an early breakaway. They kept pace through the end of the first set as Varenhorst hammered the 21-16 winner down the line. A spectacular second set was so tight and competitive that it went deep into overtime. The Dutchmen denied several Italian set points and wasted a match point of their own before Carambula tipped it over for a 28-26 win to level the match. The tie-breaker, however, was all about Varenhorst and Van de Velde again. They dominated on the court and cruised to an emphatic 15-9 close.

“We’re so happy! It’s a combination of playing here, with the crowd creating a great atmosphere and people cheering for us and the opponents, and having to fight so hard,” said Christiaan Varenhorst. “We did it as a team. We kept on fighting from the first game through the last. It’s exhausting, but rewarding.”

“Excitement! Relief! We fought so hard…” Steven van de Velde added. “It was really tough after the loss this morning. It was a really good game – they fought hard, we fought hard – and we really had to give it our all, but I’m so happy we made it!”

Two hard-fought semifinals produced the finalists on Sunday morning. In the first one, Cherif and Ahmed fought their way back from a devastating first set, to make it to their fourth consecutive final after a 2-1 (12-21, 21-18, 15-13) victory over Varenhorst and Van de Velde. In the second, Kantor and Losiak achieved their comeback before the end of a very tight first set and rode the momentum on to a 2-0 (25-23, 21-16) win over Carambula and Rossi.