A post shared by Creamline Beach Volleyball (@creamlinebeachvolley) on Dec 6, 2019 at 3:52am PST

Requinton’s inclusion in the Philippines’ final line-up for the SEA Games was also the biggest twist in his career.

Tapped as a reserve player, he was given short notice to suit up for the squad, but it was fate that worked it all out for the 20-year-old to gain an experience of a lifetime.

“My coaches told me that I will officially be competing at the SEA Games just a week ahead of the tournament,” Requinton said. “I was mentally and physically prepared as a reserve player, and the good thing is, I was able to adjust myself given the short time.

“I did not expect to represent the Philippines at the Southeast Asian Games but being chosen is one of the greatest things that happened in my life and it motivated me to learn more about the sport.”

Everything was worth it! 30th SEA Games Bronze Medalist. Your first for the Philippines! Para sa bayan! 🇵🇭🤙 #WeWinAsOne #Sambansa #H1story 🥉

Requinton hails from Bulacan, a few hours away from the capital city of Manila. He competed in the national championships were coaches from Manila saw his potential and offered him a chance to study while playing volleyball.

“I only started playing beach volleyball in 2016 when I got to the University of Santo Tomas (UST),” Requinton said.

“At first, beach volleyball felt so different from volleyball but my coaches, my teammates and my family were there to push me to do my best.”

Growing up, Requinton did not look too far for inspiration. Other than his coaches and teammates, he looks up to Philippine women’s volleyball superstar Alyssa Valdez.

“I was inspired by her heart, her eagerness to win and her passion to be the best version of herself when playing.”

Attitude may be swag, but a heart is cheerful 🤞

Early on, Requinton showed promise by winning the collegiate beach volleyball championship title and walked away with the Rookie of the Year plum.

“I have always reminded myself to be the best I can be whether in training or in competition. Back then my goals were to be a student-athlete in my dream university, play in the collegiate championships and represent the Philippines in volleyball.”

Staying committed to his goals, he played a vital role in securing the SEA Games bronze medal for the Philippines. However, the path to the podium had been rough, as he had to portray dual roles – being a student and being a hero for his country.

“During training, I have to travel from my dormitory to the training venue. It was quite challenging because I had to balance my time with my classes and training,” he shared.

Requinton’s name is already in the history books but his mission in the sport does not end there. With years ahead of him, his goal now is to represent the country in as many international tournaments as he can to bring more pride to his countrymen

“As one of the youngest players in the team, I will continue supporting the program and be a model athlete to encourage others who have the potential in beach volleyball.” 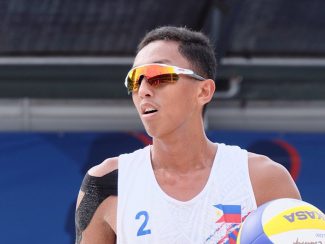