Tianjin, China, May 1, 2019 – Reigning champions Supreme Chonburi proved their amazing power and strength by conquering undefeated Hisamitsu Seiyaku Springs 3-1 (25-16, 22-25, 25-22, 25-18) in the last preliminary round to capture the top spot in Pool B at the 2019 Asian Women’s Club Volleyball Championship at the Wuqing Sports Centre on Wednesday. 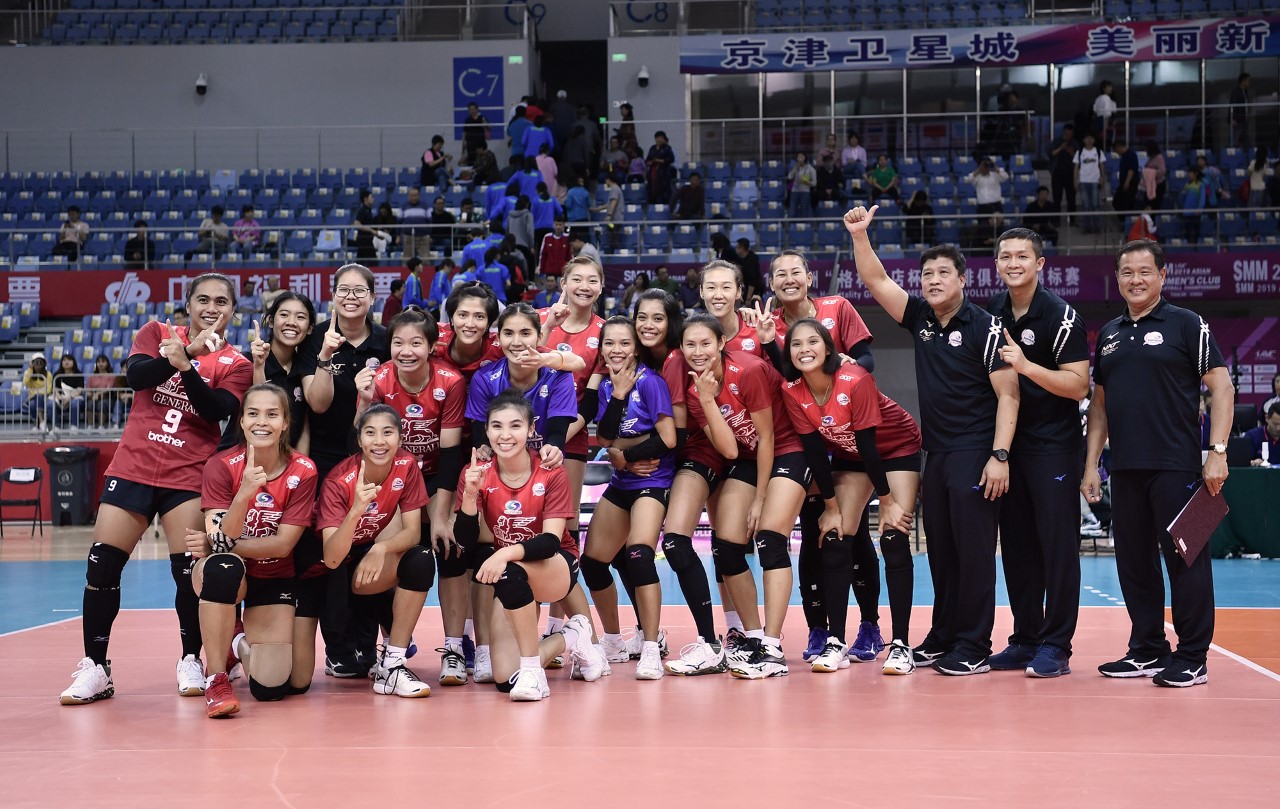 Major contribution for the winning side came from Indonesian Aprilia Santini Manganang as she had an eye-catching offensive game with a match-high 21 points. Ajcharaporn Kongyot and captain Wilavan Apinyapong contributed 18 and 13 points respectively. On the other side, attacking trio of Arisa Inoue, Hikari Kato and Fumika Moriya also scored double-digit 18, 16 and 14 points respectively. 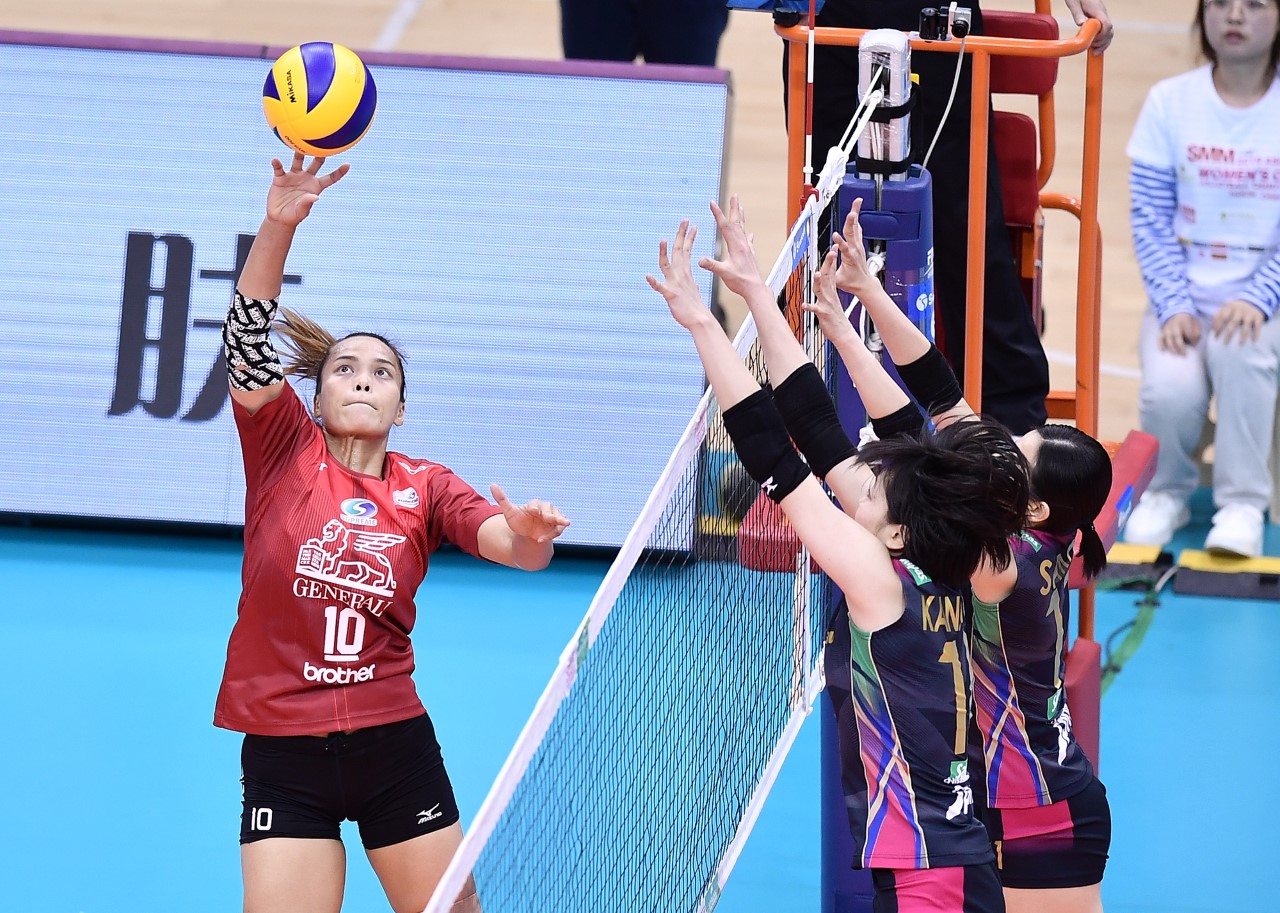 The first set saw Supreme Chonburi race to an early 10-4 lead, thanks to their well-placed service and counter-attacks. Inoue undertook the task of attacking for Hisamitsu with two wide spikes, helping fill the margin to 7-10. Supreme called a timely timeout to stop the rivals’ chasing momentum. Relying on her fantastic jumping ability, Aprilia Santini Manganang helped the Thai counterparts take the set as a demonstration of her scoring skills in spiking, dipping and blocking. The margin was widened gradually before Wipawee Srithong emitted an ace to freeze the set 25-16.

Hisamitsu regrouped and answered with cannon services in the second set and managed to take the 16-13 lead at the second technical timeout. Although Supreme Chonburi fought hard to to chase up till 22-23, the stubborn Japanese survived in the final two long rallies to clinch the set 25-22. 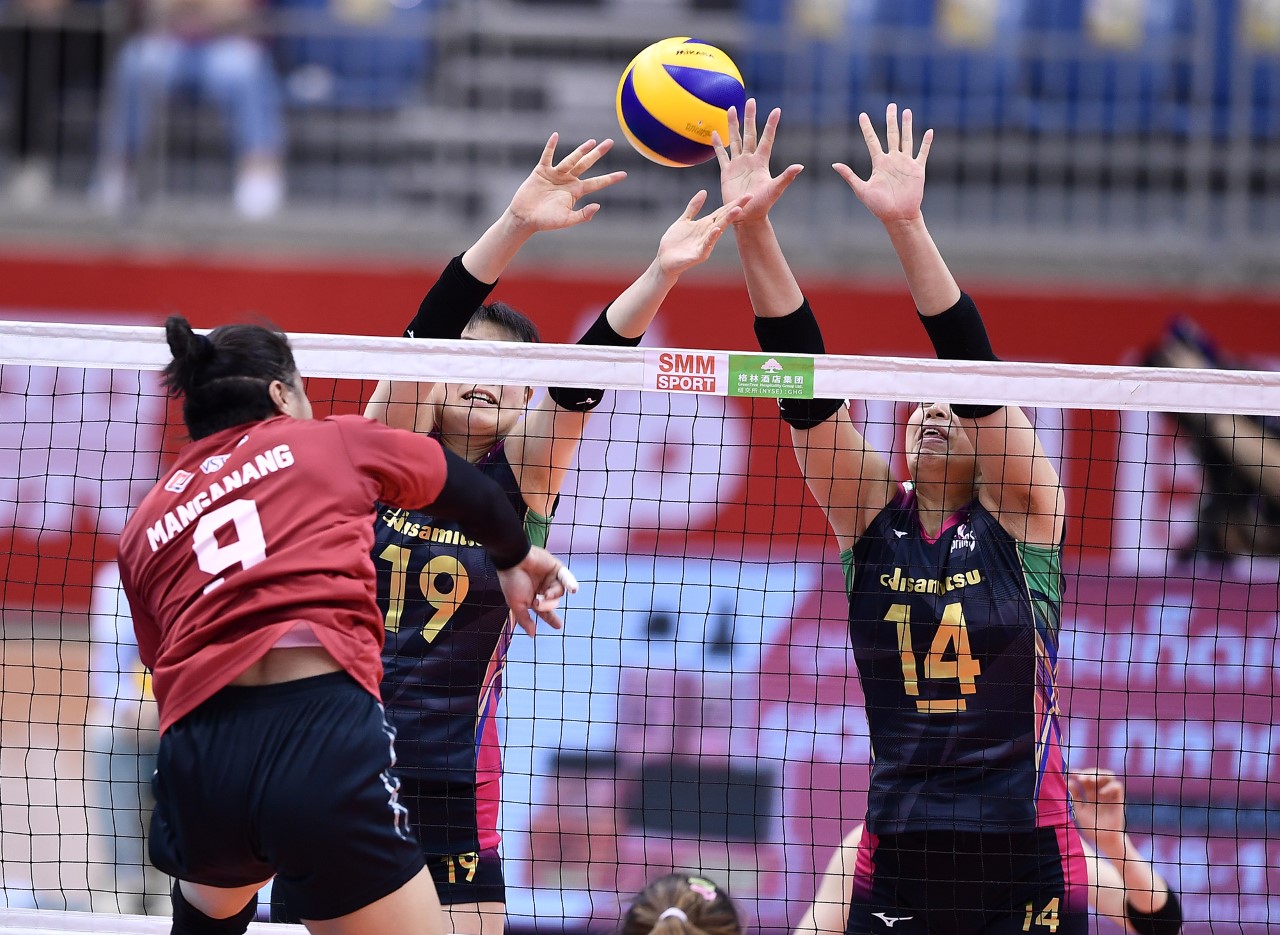 Both sides traded points from the beginning of the third set until the score was tied 20-20. Hisamitsu spiked the ball out of bound twice, and Supreme had the chance to widen the gap to 3 points at 23-20 for the first time. Inoue tried to save the set with two killing spikes but her effort was in vain as Ajcharaporn and Manganang replied with two bombing hits to help the team grab the set 25-22. 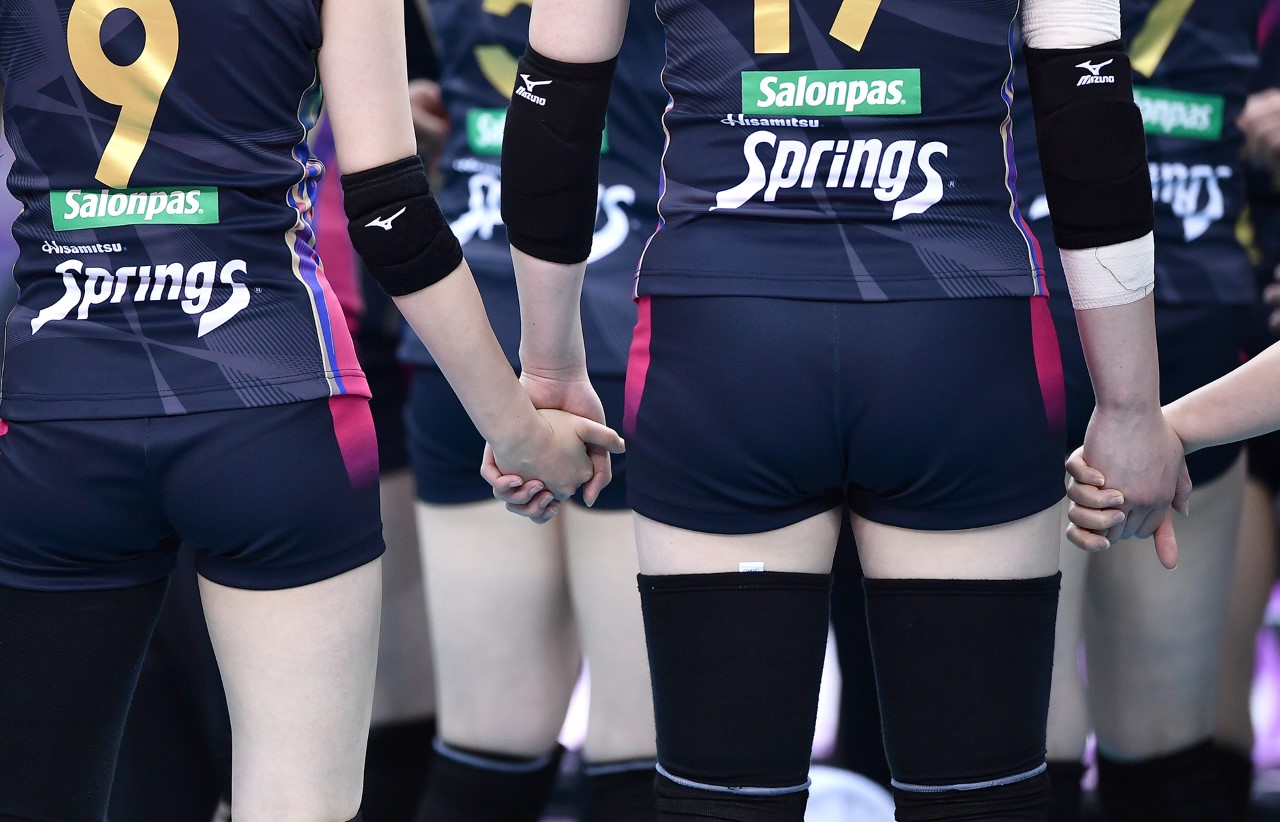 Benefiting from the highlighting performance of Miyu Nakagawa, Hisamitsu started the fourth set with a wide margin of 7-1 lead. However, Manganang refused to be shadowed as she led Supreme with a barrage of attacks to stage a marvellous comeback for the thrilling 13-13 tie. Returning to the same line, Supreme became more confident. Following a block by Watchareeya Nuanjam, they finally sealed the set 25-18 and 3-1 match.

“We are very glad to win this match because it means that we do not need to play hosts Tianjin in the semi-finals. Last year, we won the title. So I hope we can defend it. I would like to thank Chinese fans for coming and cheering us. I love to play volleyball. And I also hope I can take part in the Olympic Games next year,” said Supreme captain Wilavan Apinyapong.

“I am very happy to win the competition. We studied the opponents thoroughly. I think our offence is stronger than the Japanese, and the defence is kind of equal. We will try our best to play the competition one at a time,” said Wang Na, Chinese aid of Supreme Chonburi. 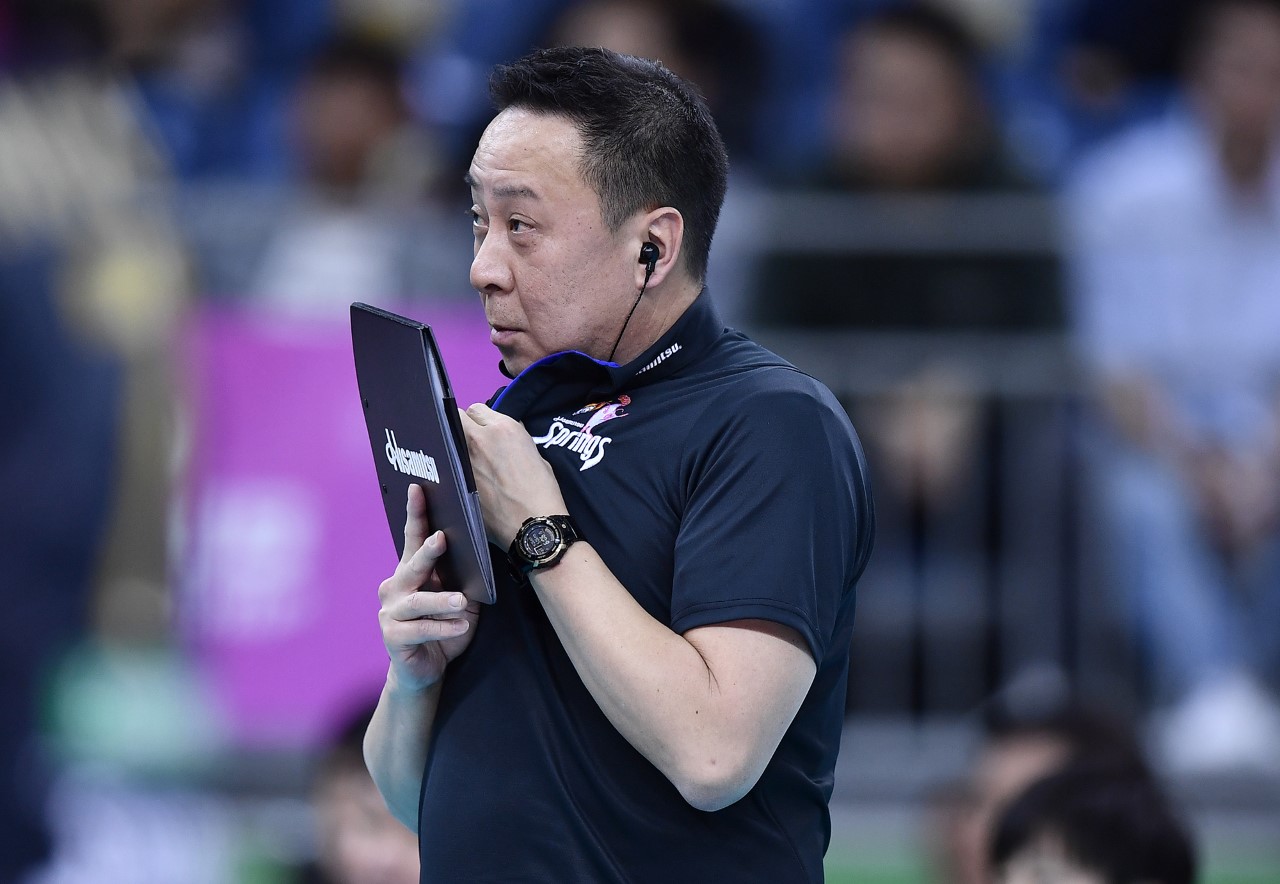 The preliminary round came to an end. We will focus on ourselves in the competition and strive for more victories. The offence of Thailand is strong, so we need to strengthen defence. We will study strategies for a possible match with Tianjin in the semi-finals. I am looking forward to that match,” commented Shing Sakai, head coach of Hisamitsu Seiyaku Springs.

VTV BINH DIEN LONG AN DOWN SRI LANKA AIR FORCE TO SECURE QUARTER-FINAL BERTHBINAGAR FINISH BOTTOM IN POOL B AFTER GOING DOWN TO 4.25 IN STRAIGHT SETS