Taipei, Chinese Taipei, April 26, 2019 – Cultural and Sports Club of Varamin Municipality produced an epic comeback win against Japan’s Panasonic Panthers in the final showdown to stamp their authority over the 2019 Asian Men’s Club Volleyball Championship at the University of Taipei (Tianmu) Gymnasium on Friday.

The hard-fought 25-20 25-16 22-25 20-25 16-14 win not only gave Varamin a sweet revenge for their 2-3 loss to the Japanese side in the top-8 playoff match last week but also stretched title-holders Iran’s domination at the topflight competition to 14 overall including four times in a row. 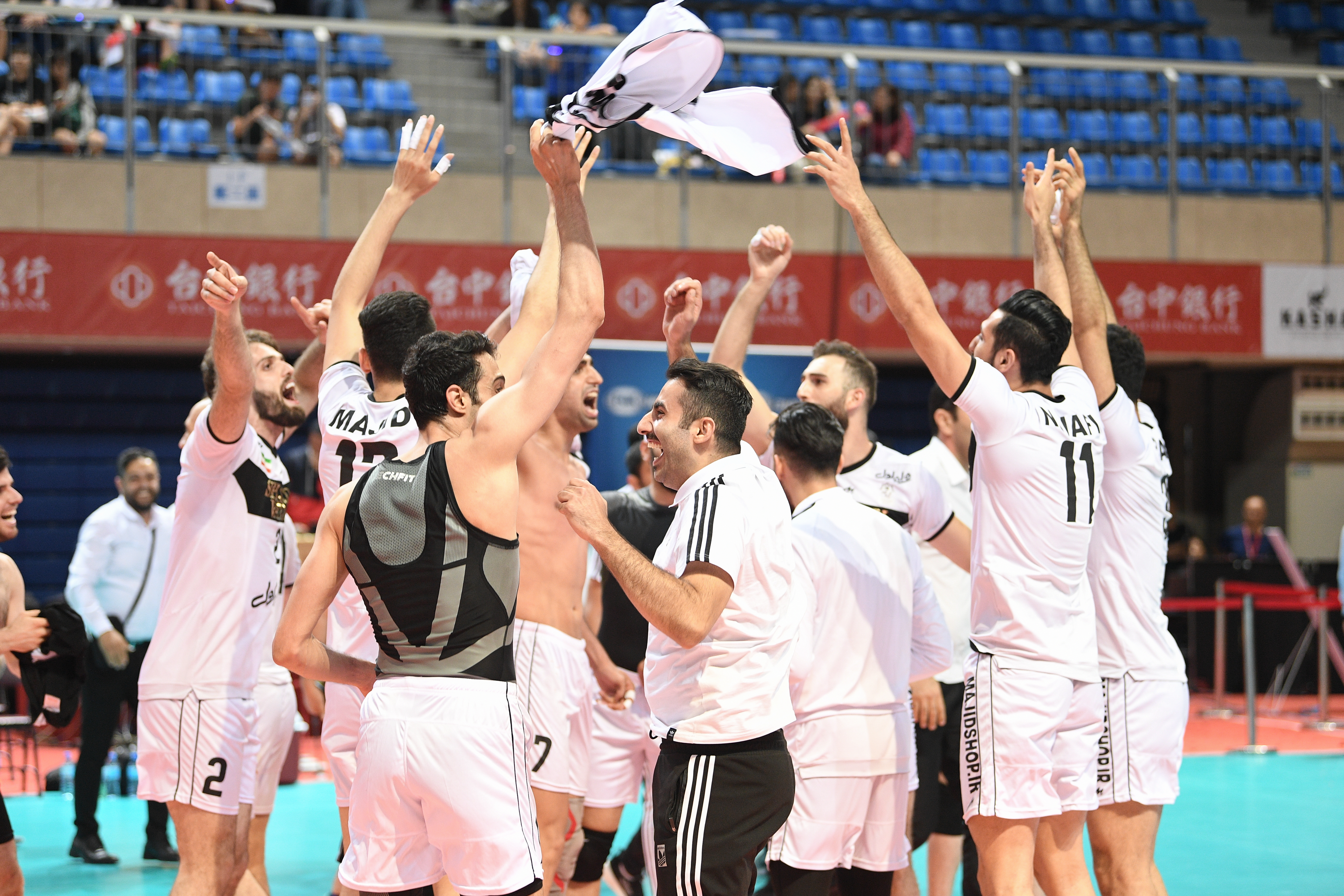 In the Friday’s showdown, Fayazi Damnani Purya chipped in with 19 points including 16 attacks from 40 attempts and 2 blocks for Varamin, while Razipoor Mohammad made good company to contribute 16 points. Michal Kubiak scored a team-high 20 points for Panthers including 17 kills from 38 attempts.

Varamin, attempting to forget the 2-3 loss at the hands of the Japanese in the top-8 playoff match, fielded a strong lineup led by ace spiker Jlali Alireza, Seyed Arash Taghavi and Parviz Pezeshki, while Panasonic Panthers, the only unbeaten team in the tournament en route to the Friday’s final showdown, were also strong with the likes of Polish Michal Kubiak, who competed in the Poland national team which won back-to-back World Championship in 2014 and 2018, left-hander Kunihiro Shimizu and the 204cm-tall Akihiro Yamauchi.

In a high-octane game, both sides fought hard from the very beginning of the first set, with Kubiak showcasing his exceptional attacking and powerful serving skills and Yamauchi firing fast attacks to help Panthers move ahead with a three-point clear at 14-11. The Iranians came roaring back through spectacular blocking punctuated by an imposing spikes from Arash and Alireza. However, Panthers ran away with it through combination attacks and excellent teamwork for the thrilling 25-20 win, with Kubiak slamming a mid-court hit for the Japanese’s last point.

In the second set, the Iranians still had no answer to the well-organised combination attacks and superb netplay skills of the rivals. The on-going battle turned out to be an easy task for Panthers. After leading with ease 23-15, the Japanese allowed the rivals only one more point to wrap up the comfortable set 25-16 to stretch it to 2-0.

Going down two straight sets, the Iranians made a strong comeback in the third set. Their resilience was showcased through spectacular blocking from Mohammad Razipoor and Fayazi Damnani Purya followed by some powerful spikes moments later by Alireza and Fayazi Damnani Purya, who continued to dominate with the beleaguered Japanese unable to muster any sort of response in the final stretch. Varamin made a few unforced attacking mistakes but still went through to win the set 25-22.

In the third set, Kubiak continued to marshall the defence, but the Japanese communication began to break down. Hard-attacking Tatsuya Fukuzawa was sent in to help improve on the team’s attacks, but the Iranians remained firm with their impenetrable defence. After taking a commanding lead with a three-point clear at 22-19, Varamin marched on their remarkable run to finally capture the set 25-20, forcing the spirited Japanese to compete in a do-or-die tiebreaker.

As home fans started to cheer on Panasonic Panthers, scoring machine Kubiak was on the board immediately and followed by a few more powerful spikes moments later to ominously stamp his authority early in the decider. Panasonic Panthers led initially 5-2 before Varamin clawed their way into game to level 11-11 and from then on, both sides poured everything they had to win the set and match, allowing leads to change hands a few times at the final assault. Despite battling hard, Panthers were never able to close the gap as the Iranians still came through to take the deciding set 16-14, match and the championship.

After the win, the Iranians jumped for joy, but things turned a little bit sour as players of both sides almost turned the competition into brawl, leaving the referee and staff coaches of both sides to stop them and their aggressions.

Varamin eventually captured the eventual title, smashing Panasonic Panthers’ sweet dreams of making history of handing Japan the Asian Men’s Club title for the first time ever since the tournament’s inception in 1999.