Hosts Thailand fielded four teams in this women-only beach volleyball event, but only top seeds Worapeerachayakorn and Tarawadee, who captured their Asian crown on home soil in Phuket last year, survived the early exit to become the only Thai pairing left in contention for the title.

The superb Thai duo, fresh from 2-0 rout of Vietnamese 17th-seeds Nguyen Lan Vu Ngoc/Nguyen Le Thi Tuong Vy, made it two in succession after brushing off Philippines Floremel Rodriguez/Genesa Eslapor 21-14, 21-15 on Sunday for a clean sweep in Pool A. Worapeerachayakorn and Tarawadee still lived up to their top billing as they maintained their unbeaten run following their 21-19, 21-15 triumph against Jidapa Bunongkhun/Patcharaporn Seehawong in the all-Thais round of last 16. In the quarterfinals, the Thai top seeds powered past Australians Alisha Stevens/Georgia Johnson for a place in the Monday’s semifinals. As Woraperachayakorn and Tarawadee secured their semifinal berth, the other home players suffered setbacks.

Thailand 2’s Woranatchayakorn Phirachayakrailert/Charanrutwadee Patcharamainaruebhorn succumbed to 16-21, 16-21 to New Zealanders Shaunna Polley/Alice Zeimann to finish second in Pool G to secure a place in the round of the last 16 on Sunday. However, their delight did not last long as the Thai duo suffered another loss at the hands of Chinese Xia Xinyi and Lin Meimei to crash out of the tournament.

Jidapa and Patcharaporn played a must-win match against Thailand 1’s Worapeerachayakorn and Tarawadee in the round of last 16 but found the compatriots too strong to go down fighting, while the expectation of Suchinna and Apinya could not be that high in this star-studded competition to succumb to 13-21, 10-21 defeat to second seeds Miki Ishii and Sayaka Mizoe. 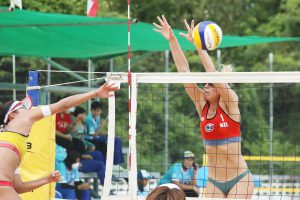 Japanese Ishii and Mizoe, silver medallists at the last year’s Phuket-hosted Asian Senior Beach Volleyball Championships, continued their unbeaten streak in the quarterfinals, where they struggled to beat Kiwis Polley and Zeimann 23-21, 21-18 for a spot in the semifinal. Japan 2’s Akiko Hasegawa and Yurika Sakaguchi advanced to the round of last 16 and still kept their high hopes on playing in the quarterfinals alive following their 21-17, 21-11 win against Vietnamese Nguyen Lan Vu Ngoc/Nguyen Le Thi Tuong Vy. However, the Japanese failed to make their mark in the quarterfinal clash against China 2’s Wang Xinxin/Zeng Jinjin. Wang and Zeng beat Thailand 3’s Jidapa/Patcharaporn 21-15, 21-19 for a clean sweep in Pool D. The Chinese continued their unbeaten streak after routing New Zealand 2’s Maccdonald/Milton 21-15, 21-15 in the round of last 16 and Japanese Akiko/Yurika 21-12, 21-13 in the quarterfinals. Wang and Zeng booked their semifinal ticket. Australian sixth seeds Nicole Laird/Phoebe Bell cruised past New Zealand 2’s Olivia Macdonald/Jasmine Milton 21-10, 21-19 for a clean sweep in Pool F and their place in the round of the last 16. There, the Aussies remained unbeatable to topple Vanuatu’s eighth seeds Toko Sherysyn/Majabelle Lawac 21-13, 21-15, but struggled hard in the quarterfinals, where the determined Aussies beat China 1’s Xia Xinyi/Lin Meimei in hard-fought three-setter 21-19, 12-21, 15-11 for a place in the semifinals. 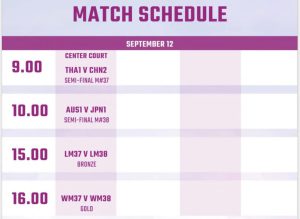