Doha, Qatar, October 12, 2019 – Qatar defeated both USA and Germany on Sunday to please the home fans as Pool A winners in the beach volleyball 4×4 men’s tournament at the 2019 ANOC World Beach Games in Doha. They will face Chile in one of Monday’s four quarterfinals, the other three being Australia against Indonesia, USA against Mozambique and Poland against Germany. 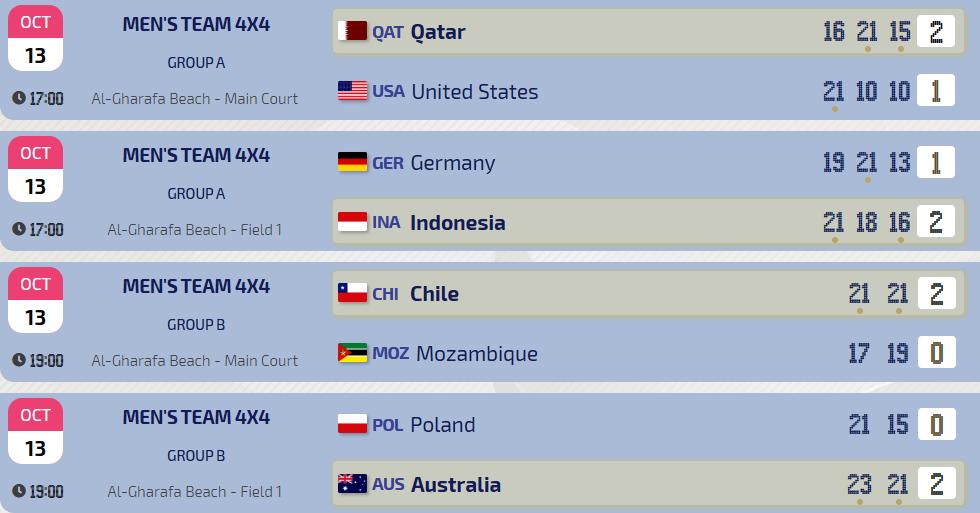 Capitalizing on the relentless support of the home crowd from the packed stands around centre court, Qatar claimed two victories on Sunday to finish unbeaten on top of Pool A. First, they managed to master another great comeback from a set behind to emerge with a 2-1 (16-21, 21-10, 15-10) victory over the strong team of USA. World Tour star Cherif Younousse piled up as many as 20 points towards his team’s success. The home side’s next win was a straight-setter – 2-0 (21-18, 21-15) over Germany, with a 10-point contribution from Cherif.

“We didn’t expect to win all our three matches in the pool, because of the high level of our opponents,” said one of Qatar’s key players, Denis Messelmani. ”The Americans are strong, real legends on the beach, and the Indonesians play beach volleyball throughout the season. We tried our best to fix our team over the last three weeks. We had very little time to prepare and it was amazing to defeat these teams. Our biggest weapon are the spikes – by Cherif and, in the middle, by Saif Elmajid – and maybe tactically stronger, because most of us are indoor players.”

The other three teams finished on the same 1-2 win-loss record and had to be ordered by point ratio. Claiming their first win in the very last match of the pool, a hard-fought 2-0 (21-18, 23-21) over Indonesia, USA’s stellar line-up finished pool runners-up, ahead of third-placed Germany and fourth-placed Indonesia. Taylor Crabb checked out of that game with an impressive tally of 19 points. Earlier on Sunday, Indonesia snatched their first victory in a 2-1 (21-19, 18-21, 16-13) three-setter against Germany, with Rendy Licardo scoring 18 times. Point ratios proved decisive in determining the final standings in Pool B. Despite losing their last match on Sunday, Australia managed to hold on to the first place in a 2-1 win-loss record and better point ratio than Poland. Mozambique delivered a come-from-behind 2-1 (16-21, 21-16, 15-11) victory over the Volleyroos to overtake Chile for the third place, also on point ratio as both teams finished on a 1-2 record. Delcio Soares and Jose Mondlane scored 13 points apiece for the African squad, while Maximilian Guehrer topped the chart with 17 points for Australia.

The Australians themselves managed to come back wiping out solid gaps in favour of Poland in each of the two sets between the two sides to emerge with a 2-0 (23-21, 21-15) win earlier in the day, with Guehrer on fire with 20 points. Chile achieved a similar feat in their game against Mozambique. In each of the sets, the Africans could not hold on to a lead as wide as five or six points, allowing their South American opponents to claim a 2-0 (21-17, 21-19) victory. Chile went on to lose to Poland to end up bottom of the pool. The Polish teenagers managed a 2-0 (21-19, 21-13) straight-setter, with Mikolaj Miszczuk top scoring 13 points, to snatch the runner-up position. 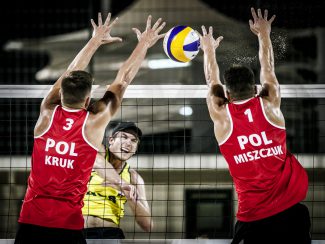 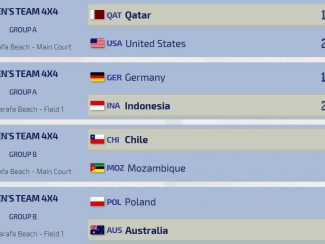 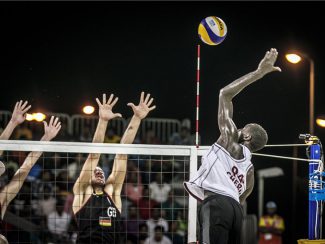