VINIT KUMAR READY TO LEAD INDIA TO THE NEXT LEVEL

Bangkok, Thailand, September 22, 2020 – Vinit Kumar’s first big tournament for the national team was the 2016 South Asian Games, where his team clinched gold to the delight of their home fans in Guwahati. Since then, he has redefined his vision to take India to the next level and compete in top-tier international events.

“My very first AVC event was the 2019 Asian Championship in Tehran. It was a good experience. We played a lot of good teams like Iran and Australia, so we learned a lot from that tournament.

“The latest one was the Olympic Qualification Tournament in Jiangmen, China. Observing the best teams on how they move on the court and utilise various tactical patterns there taught us how we can improve on our own game.

“We may not have achieved our goal but leading the team as captain at the Olympic qualifiers in Jiangmen is by far the biggest achievement in my career. So I will do my best to perform well for my country in future international events and work together with my teammates to make India one of the top teams in the world.”

Vinit traces his interest in the sport back to the days when he would watch superstar Yejja Subba Rao play.

“The person that influenced me most was Yejja Subba Rao. He was my favorite national team player then. He spent 12 of his 20 years in volleyball with the national team. He was sensational when he won three awards – Best Blocker, Best Spiker and MVP – at the 2003 Asian Championship.”

But Vinit only began to get serious with the game when he was already in college.

“My college P.E. teacher asked me to play volleyball because I was very tall. I developed my interest in volleyball when I actually saw my college team play. The combined skills of the players, the movement and jumping action piqued my interest to try it out.”

So he did try playing volleyball and soon became better than everyone else in the team. His talent was noticed and joined the national team, where he continued to develop not only his playing skills, but also leaderships skills that led to his current role as captain.

“Volleyball taught me a lot about having team spirit and unity and overcoming pressure in difficult situations. The dynamics of unity and cooperation between the players and the excitement of winning points in a tight match are things that make this team sport great.

“When I became captain of the national team, I took the responsibility of making sure that everyone will perform his best so we can get a good result for our country. My job is to always check the mental and physical being of all players.

“Before each match, we would talk about our game plans and I would always advise my teammates to be confident and release all the pressure on their minds about the match. I am always there, talk to my teammates about their needs and problems because I just want them to always give their best.

“Of course, losing a match is always a difficult moment for me as captain, but as captain you have to be tougher and be able to face these moments better than the others.”

The Indian skipper may have one of toughest tasks to perform in the team, but that does not mean he cannot have fun outside the court and lead a normal life.

“I love to learn different things, so I read books, explore different places and watch a lot of movies. I also have a full-time job at Oil and Natural Gas Corporation as a security officer.”

When asked about which player he would like to switch places with for a day, he chose United States superstar Matt Anderson.

“I would like to be Matt Anderson for a day. He is my favorite and it would be nice to play for one of the top teams in the world.” 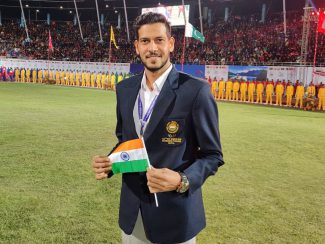