A brand new competition is being launched by Volleyball World, combining beach volleyball with an entertainment platform that brings together music, food and the beach lifestyle out of which the sport was grown.

The Volleyball World Beach Pro Tour travels across the globe, showcasing the best of beach volleyball at vibrant events in stunning locations and iconic cities.

To be launched in 2022, the Beach Pro Tour is also the annual international beach volleyball circuit featuring the best ranked athletes in the world, with competition to be held at three levels:

The Beach Pro Tour culminates with The Finals each year. 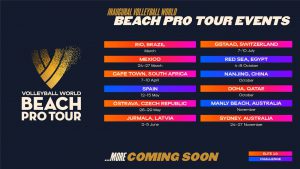 The Elite16 competition is the highest level of the Beach Pro Tour with the top 16 teams per gender of the world in fierce competition to maintain their position within this group.

The competition is held in four pools of four teams each followed by a single elimination bracket, all over four days of intense action for a total of 64 matches for double gender events, without any qualifiers.

With the highest level of TV production, a fan area worthy of a festival and a sport presentation like no other, you are guaranteed to dance and cheer for your favourite teams! 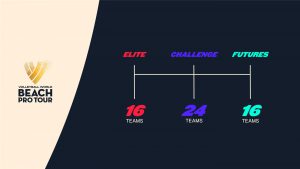 The Challenge level tournament is a feeder to the Elite16 level events including 24 teams, with players challenging and battling on the sand to gain ranking points.

The competition format has 24 teams per gender in the Main Draw with modified pool play followed by a single elimination tournament over four to five days of competition for a total of 80 matches for double gender events. Up to 32 teams can take part in qualifiers to advance to the Main Draw.

And the Futures level tournament itself is a feeder to the Challenge-level events. The Futures allow cities to develop the sport in their countries and build up the capabilities of promising youth teams.

The Futures tournaments include 16 teams per gender in the Main Draw with modified pool play followed by single elimination bracket over 4 to 5 days of competition for a total of 56 matches for double gender events. Sixteen teams can take part in qualifiers for Main Draw placing.

Each season ends with The Finals – the ultimate event closing the year and featuring the best 10 qualified teams for a show everyone will remember!

Volleyball World is a new partnership between the FIVB and the CVC Capital Partners aimed at driving growth, innovation, and investment in volleyball around the globe.

Volleyball World’s goal is to create an integrated ecosystem connecting all volleyball stakeholders (fans, athletes, corporate partners) together through both digital and live events.