Bangkok, Thailand, August 25, 2020 – The Australian Women’s Volleyroos are beating the men week in week out, crushing their opposition in the Men’s Open League at Lyneham, said a latest news release by Jaike Altieri on canberratimes.com.au.

With the team having six of the nation’s best playing every week, they decided to take the next step in their development and join the competition.

Coach Marty Collins said it was all the coaching staff’s idea.

“With the girls, it’s easy to get in one of the decent men’s club teams to play against, because the girls are the best of the best,” Collins said.

“It was really cool because we lost the first few games against them (men’s club teams) over a few years, then we had a really close loss, then we actually beat them last December for the first time leading into the Olympic qualifiers.

“It was really cool to see that development over a couple years going from losing to winning.”

The Women’s Volleyroos have never made an Olympic games, but became the first Australian women’s volleyball team to make the qualifying stage.

Volleyroo Mikaela Stevens says she’s disappointed not to make Tokyo 2020, but said making the qualifiers was still a big achievement.
“It was disappointing not to qualify, but there was almost a sense of satisfaction in the fact that we did qualify (for the qualifying stage) in the first place,” Stevens said.

“I’m one of the younger members of the team and for me I know there’s another cycle. But I think I was content in the fact that, this is the first time we’ve qualified for the tournament in a long time.

“I think for a lot of the younger girls it is a big steppingstone for us and our main goal is to grow women’s volleyball in Australia, and to know I was a part of that satisfied part of my Olympic dream.”

In 2017, the AIS took its first intake for the women’s Centre of Excellence, a pivotal part to the progression of women’s volleyball.
Over the three-year period, coach Collins has seen improvement every year.

“Every year, we keep starting from a better place technically on the court, tactically and physically,” he said.

“Our average spike touch is 300 centimetres for the group, which is pretty good, I think we started in year one at about 28 centimetres, it’s a huge achievement.

“It’s definitely getting stronger every year, and the depth of the team is improving for the national team.”

Volleyball sits in the shadows of the big leagues in Australia, compared to Asia, North America and Europe where the sport is prominent.

Women’s Volleyroos captain Jenny Tait wants people to give it a crack.

“We do have technical skills but it’s also fun to just play socially and that’s what we want people to fall in love with.” 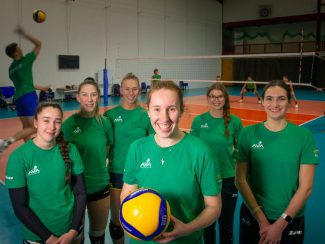