Lausanne, Switzerland, June 3, 2019 – With pool play reaching the halfway point this week, the 2019 FIVB Women’s Volleyball Nations League is getting down to business, as teams begin their final push to make the Final Six in Nanjing from July 3 to 7.

With none of the four leaders of the table, Turkey, USA, Italy and Poland (all at 5-1 after Week 2) going head-to-head this week, as each head off to different venues aroud the world, there’s every chance that we could still have deadlock at the top of the standings, come Thursday evening.

Turkey remain on track for a repeat of their 2018 VNL success when they finished runners-up to USA, and would be looking at adding another three wins this week as they travel to Bankgok to face opponents further down the standings.

But USA are also eyeing three more wins in front of their own fans at Lincoln, Nebraska, where they’re expected to bring on some of their top stars that have been resting for the first two weeks. Watch out for their clash with Brazil on Thursday evening, to close Week 3.

Despite only gradually building up to their full potential in terms of lineup, Italy have been impressive over the first two weeks. But this week they’re up against reigning Olympic champions China. And despite the fact that China are already assured of their spot in the finals as hosts, this is certainly a highly anticipated match-up.

Obviously, all eyes will remain focused on Poland’s Malwina Smarzek, who has emerged as star of the show over the first two weeks of competition, high-scoring in a number of matches and even breaking her own all-time VNL-high with 41 points in just four sets against Bulgaria last week.

The 22-year-old opposite currently leads the overall scorers list of the 2019 VNL with 172 points from six matches – 49 points above her nearest opponent, Brayelin Martinez of the Dominican Republic.

She’s back again this week to lead Poland – and maybe break another record or two. 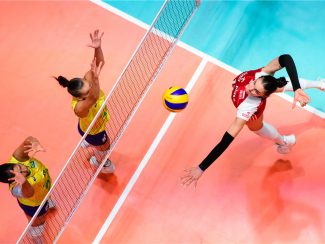