Qatar’s Tijan Ahmed and Abdullah Nasim survived a strong challenge from Oman to emerge as eventual champions in the West Asia Beach Volleyball Zonal Tour at the Aspire Courts in Doha, Qatar on Monday.

Ahmed and Nasim scored a scintillating 21-19, 21-19 win over Haitham Al Sharqi and Mazen Al Hashemi in a hard-fought final. The Omani players came up with a skilful display, catching even Ahmed off guard at times. They waged a tough battle but Ahmed’s experience and Nasim’s solid display helped the hosts wriggle out of tight situations.

Whenever the Qatari duo hit a nice rhythm, Ahmed’s thunderous smashes and Nasim’s solid play at the net were a treat to watch. And they combined well at just the right moments, pulling away to set wins even as their rivals closed in. The victory was the culmination of an impressive run for the host team, which did not drop a set in four matches. 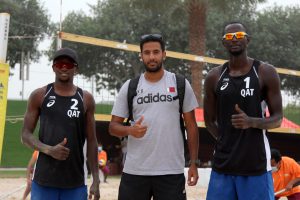 Earlier, Qatar’s Tijan Ahmed, bronze medallist at the last year’s Tokyo Olympics, and Abdullah Nasim booked a place in the final of the seven-nation event after defeating their Palestinian counterparts in straight sets (21-10, 21-13) in the semi-finals, with Oman outplaying Syria 2-0 (21-10, 21-13).

In the preliminaries, the Qatari duo powered past Syria 2-0 (21-16, 21-13) to top their Group A with a clean record, while Oman also reached the semi-finals in similar fashion after occupying the top spot in Group B.